µ-Blog – Stan Winston Would Have Been 70 Today 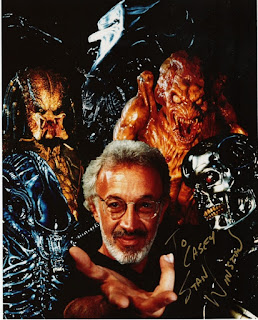 Today would have been the 70th birthday of special make-up effects creator, Stan Winston. Winston passed away on June 15, 2008 from multiple myeloma. He is best known for his work on the Terminator, Aliens, Predator, and Jurassic Park films, winning four Oscars and numerous other awards for his work.

This weekend, April 9 and 10, we are hosting a science fiction film blogathon in honor of his birthday, The Blogathon from Another World. We have a couple of overachievers who posted early:

Thanks Elise and Steve. Good job.

The full lineup is:

Look for the rest this weekend.
Posted by Chris Sturhann at 5:03 PM