A New Kilt for TCMFF, Translated

Last week, I stumbled on a site that sells kilts. They had one on clearance for a good price. I decided it would be really cool to get a new kilt for the TCM Classic Film Festival (TCMFF) in two weeks. Their site wasn't real clear on how the sizing worked. Most but not all kilts go by true waist sizing. You put a tape around your waist, and that's your size. They had a customer service number listed, so I called. They said, measure your waist where the waist of your pants normally sit and add one inch.

It turns out I was between sizes. The safe bet was to order the size up. The kilt is designed so that you can make it smaller, but if you can't get the largest size around you, you can't wear it. The problem is they were out of the size up, so I took a chance on the size down. I've been dieting, so if it was close, there was hope that it would fit by TCMFF.

It came yesterday. Wow, that was fast. I tried it on. It was tight but I could get into it. Yea, me. Provided I don't go crazy, I should be good for TCMFF. Proud of myself, I posted the following on Facebook: 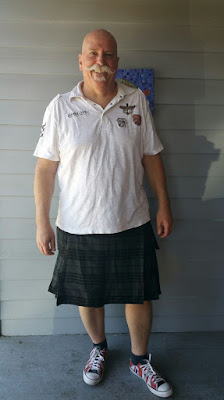 I got a lot of likes and comments including the following from one my TCMFF cronies, a woman from New York:

I noticed that there was a translation link, so I clicked on it:

At the risk of sounding vain or conceited, I don't think that is what she had in mind.
Posted by Chris Sturhann at 10:12 AM