Dial M for Murder in 3D 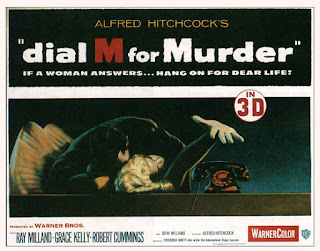 Last night, I had a chance to see Dial M for Murder in the theater. It's not my favorite Hitchcock movie. I don't think it would even crack the top 10. Still, how often do you get to see Hitchcock in the theater, so I went. They were showing it in 3D, which I probably wouldn't have gone out of my way for, but originally they released the film in 3D, so I figured, what the hey.

Now, I have to say I'm not real big on 3D. I'm old. When I was young, 3D involved cardboard glasses that had blue and red cellophane lenses. It really more weird than 3D. What Avatar came out, I didn't bother to see it in 3D. Why should I? It wasn't that great of a movie in regular D. Why would I pay extra to see it a second time in 3D? Of course, after that, the movie industry went completely ape shit on 3D. Still, you had the option of regular D or 3D, and I always went for regular D. The result was that, aside from a demo at the Sony Store, the only real modern 3D I've ever seen was "Captain Eo" at Disneyland probably 20 years ago. Then again, that was basically a long music video with cutesy aliens floating above your head.

This was a new experience for me. I would like to say that it was incredible seeing Grace Kelly on the big screen and in 3D. I would like to say that it felt like I could just reach out and touch her boobs. But I can't. It was kind of a cool effect. When you looked at Grace Kelly, she was clearly at a different object on a different plane than what was in the background or the foreground if she was standing in front of a desk or something. Very cool, and on a certain level, quite impressive. And when she reached out toward the audience like in the poster above, it sort of looked like her hand was coming toward you. But mostly, it just looked weird. On the whole, it was distracting. And annoying. And when I left the theater, I felt slightly sick in the stomach. I guess I'll give it another 20 years before I do 3D again. Maybe, by then, they'll have figured out the boob thing.
Posted by Chris Sturhann at 5:15 PM 2 comments:

This post is part of the ¡De Película! Hollywood’s Hispanic Heritage Blogathon, sponsored Aurora over at Once Upon a Screen. Please check out her site at the link below for releated posts. 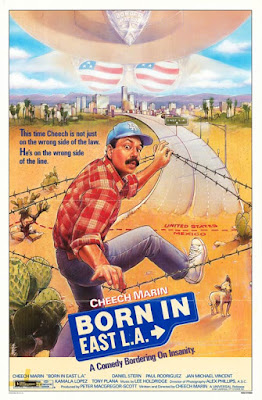 Written, directed, and starring Cheech Marin, Born in East L.A. is not going to make anybody's top 10 list or even top 100 list. Still, there's way more to it than just a novelty song made into a movie or a Cheech and Chong movie minus Chong. But does Born in East L.A. really belong in a blogathon about Hispanic Heritage movies?

Now I have to say, I was a little worried about Born in East L.A. I hadn't seen it in about 10 or 12 years, and I was worried that maybe it wouldn't hold up. Sometimes, you see a movie after a long time and it's just not as good as you remember it being. I'm glad to say that was not the case to here. I laughed a lot watching it in preparation for this blogathon. Sure, some of the humor was crude and sexist but show me at comedy from the 80s that isn't.

In what follows, there will be spoilers. If you heard the song "Born in East L.A.," you pretty much know the premise of the movie. Still if you were one of those people who don't want to hear any details about a movie you haven't seen, you should stop right now and scroll past the End of spoilers heading below.

Cheech Marin plays Rudy Robles, a guy from East LA, who installs car stereos. On his way home from work, he is supposed to pick up his cousin who's just come in from Mexico. Of course, he forgot his wallet that day, so when he ends up in a Migra (U.S. Immigration) raid, he is is deported to Mexico. He tries to explain that he's an American citizen, but since he doesn't have his ID, he can't prove it. Sound a little bit far fetched, not to me, it doesn't. If you are brown skinned and are arrested with bunch of illegal aliens and have no way of proving that you aren't illegal, would anybody really believe you?

At the border, he tries to explain who he is but when they look him up in the computer, he shares the same name as someone has been arrested and deported a dozen times. The immigration official says that if he needs to make a phone call to get his ID and prove who he is, he can do so out there, in Mexico.

Thus, Rudy ends up in Tijuana with no ID and no money and no way of getting back.
He tries to call home but then remembers that his family is out of town and gets answering machines whenever he tries to call anyone else. Of course he's in Mexico for a period of weeks or even months. Presumably, he could call call a dozen times a day, and eventually he  would get a live person who could make arrangements to get him his ID, but that would make for a very short and unfunny movie. The humor centers on Rudy efforts to get back to the U.S., but it's really about how he doesn't fit in down there, and how much different it is being a Mexican American than being Mexican.

Rudy meets Daniel Stern, an American expatriate who lives in Tijuana because of something he did illegal up here. Rudy gets various jobs from Stern, everything from getting people into a bar for ten cents a head to selling fake passports and green cards. There's also a great sequence where he tries to teach some OTMs (illegal immigrants who are Other Than Mexican) how to fit in up in East LA. These Asian immigrants have jobs up in the East L.A. but they keep getting deported because they can't fit in. Rudy teaches them how to blend in to East L.A. with pretty hilarious results.

He also meets and falls in love with Delores, played Kamala Lopez, an El Salvadoran immigrant, who like Rudy works multiple jobs, trying to earn enough money to get to the U.S. Cheech Marin and Lopez have good chemistry together, and their romance works for me.

There's a really great sequence where Rudy tries to get back to the US as a pollo (chicken), a Mexican national who tries to get over the border by just running across and avoiding the Border Patrol. Of course, he always gets caught in a series of sight gags, that work on much the same level as a silent comedy. Stupid, but very funny.

He also hooks up with a mariachi band and helps them earn more money by teaching them American songs, including "Twist and Shout," which they already know as "La Bamba," basically the same song. At one point he helps them earn a lot of money by playing "Roll Out the Barrel" and singing it in German for some German tourists. Yes, Rudy knows how to speak German because he was stationed in Germany in the Army (he was being all he could be, but all they would let him be was a mechanic). Yet, he can barely speak Spanish because he never had to.

Rudy comes to realize that even though it sucks being stuck down there. He is still way better off than most of the people south of the border. He does these acts of  tremendous charity, that may seem sappy, but work for me. Ultimately Rudy and Delores make it to the U.S. and East L.A., bringing his former OTM students with them. (They are able to bluff their way passed a cop because of what Rudy taught them.)

There is a slightly different ending where Rudy and Delores get kidnapped and held for ransom by coyotes, criminals who transport illegal immigrants in the U.S. This wasn't in the version I just watched. I assume it was buried in the Special Features on the DVD.

The critics didn't like Born in East L.A. I think they were expecting another Cheech and Chong movie, or at least humor like you'd find in a Cheech and Chong movie. That's not what Born in East L.A. is all about. Sure there's some over-the-top ridiculous humor, but there's also humor that is subtle and nuanced, as well as scenes that are touching and emotional. I don't think critics were expecting that out of Cheech Marin, and as a result, they gave the movie poor reviews.

Born in East L.A. is not the greatest movie of you will ever see, but it works for me on a lot of different levels. It's about Mexican American culture and ultimately, how it's not the same thing as Mexican culture, despite with society might think. The very thing that the critics disliked about Born in East L.A. is exactly what make me like it as well as I do.

Please check out Aurora's site for related posts in the Hollywood's Hispanic Heritage Blogathon at Once Upon a Screen: