This year, there was a lot more going on at the TCM Classic Film Festival (TCMFF) virtual edition. With the addition of more programs on HBO Max, and Club TCM events on Zoom, it made the choices much much harder this year.

For those of you new to the Festival or my blog or my Festival picks, I normally do them in the format of NCAA tournament brackets. In an in-person TCMFF, I would do them by times, as you normally have about five things going on at the same time, and you have narrow it down to one. And try to find time to eat and sleep during all of that.

Obviously this time, it's less of an issue. You still need to find time to eat and sleep. But with roughly half the material being on HBO Max, you can watch them or less at your leisure and with a DVR, I should get to see pretty much everything I want to.

To make this work, you really need to have round numbers. I counted 77 individual events, not counting three Club TCM events I'm unable to attend. I may have miscounted, don't quote me on this. That's the number I came up with. That's the number I'm using, so there. I did combine two related pairs, because it made sense to do so the SF Sketchfest Plan 9 from Outer Space and Plan 9 from Outer Space and Tex Avery King of Cartoons and Tex Avery at MGM. This brought the total down to 75 events of which I dropped 11. Mostly these are films that I've seen a lot of times or I really don't care about or possibly have never been able to make it through the movie.

In no particular order these movies are:

Also, I did drop off three of the club TCM events, because they were unavailable or I had a conflict. Meet TCM was still available but it was scheduled the same time I'm getting my first COVID vaccine, so I'll do the responsible thing for society and get vaccinated and miss this. You're welcome. Opening Night Toast with the Hosts and Curating The Classics are things I definitely would have wanted to see but both were full by the time I got around to registering for them. I'm really bummed here. That'll teach me to procrastinate. I'll blame working too much, but the truth is I waited too long.

This left 64 films and other event, which I broke into four brackets of 16, named after venues at a normal TCMFF. I did take the liberty of taking my top four picks and putting them in the top each the bracket of 16, so that they would have a good chance of making it to the final four. My picks, my rules. Then I drew the names of the films randomly to fill in the brackets, trying to put up TCM films against the HBO Max films, as much as possible

The other big battle in this group is in the second round with L.A. Rebellion about Indy African Film-makers against the Bill Morrison film, let me come in. Never seen either one here, but Bill Morrison does really cool stuff with lost/damaged silent films. It's playing really late, even at  Pacific time so I might end up recording it. I'm going to do my best to watch L.A. Rebellion on HBO Max anyway.

For the rest of the brackets, it really comes down to Tex Avery. By the way, TCM, you're killing me on the Tex Avery thing, I know you think it's cute to put it on Saturday morning, but 6:00 a.m. eastern time is 3:00 in the morning here in San Diego. Even though this is one of my top picks, I may end up recording it, although I might just go without sleep and get up at the in the wee hours and watch it, anyway. The other surprise here is I Love Trouble. I've never seen it, premiere on TCM, and that's strong enough to carry it into the Elite 8.

The story here is Sound and Sound Makers (strikethrough is They Won't Believe Me playing at the same time). It's one of my top picks, mostly because I've seen Ben Burtt and Craig Barron at the live festival, and their stuff is always way cool, and as an interactive Zoom  presentation, that just makes this a must see, especially since I missing most of the other Zoom presentations.

The toughest decision in the first round comes down to two essential films On the Waterfront and West Side Story. Going with West Side Story mostly because they're calling it the Opening Night film of the festival, which I don’t normally get to see because the level of pass I have. Would be a very tough call if there were opposite each other at the same time, and you had to decide which one you wanted to see more on the big screen.

The other tough call in the first round is Nichols and May vs The Searchers. If it was a real festival I would probably go with The Searchers. I've never seen it on the big screen and it would bound to be playing at the Egyptian or the Chinese, and that would be spectacular. The thing is I've seen The Searchers a bunch of times and Nichols and May, these behind-the-film-makers films TCM selects are usually really cool, so Nichols and May goes on and oddly it makes it all the way to the Elite 8, another surprise. 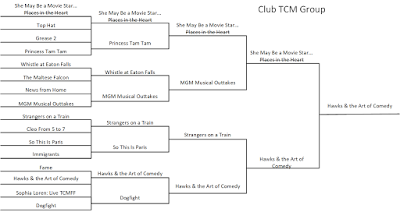 The story here is SF Sketchfest Presents Plan 9 from Outer Space. This is my second pick for the entire festival behind Tex Avery it dominates in this whole group.

I really need to see The Méliès Mystery. It gets knocked out by Plan Nine but I'm going to watch this one no matter what on HBO Max. The other shocker in this group is Streets of New York. Anything Bruce Goldstein has his hand in is pretty cool and looking at the history of film in New York from the Silent Era to the 1970s, that's got to be a treat. 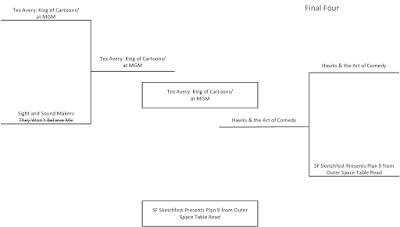 Probably not too surprising that Tex Avery takes out Sight and Sound Makers. I will watch both but Tex Avery is just so cool, so cool I probably will get up at 3 am for it and be totally wasted for the rest of the weekend. The shocker here is in the other bracket. Hawks & the Art of Comedy taking out SF Sketchfest Plan 9 from Outer Space. I didn't see that one coming myself but if it came down to the two I think I'd rather see the Hawks & the Art of Comedy. Again, I will watch both, but that's what the pick would come down to.

Unfortunately Hawks & the Art of Comedy cannot stand up against Tex Avery, so Tex Avery stays my number one pick, followed by Hawks & the Art of Comedy, and then we have the consolation game between Sight and Sound Makers and SF Sketchfest Plan 9. Plan 9 Takes it for third place with Sight and Sound Makers coming in fourth.  Just to round it out, I'm going to pick one film from earlier in the Festival to be my number five pick, so you get my top five. That would be The Méliès Mystery.

Effectively this is fairly typical of an in-person TCMFF. You often have to skip films you really want to see because it's up against something you want to see more. With being able to watch things on HBO Max on my own schedule and DVRing the stuff I really need to see on TCM, I stand a good chance of seeing pretty much everything I really want to. Good job, TCM. I will see you all in Hollywood in 2022.

Posted by Chris Sturhann at 7:38 PM No comments: