Much of what happened in the couple of days leading into the TCM Classic Film Festival (TCMFF) April 11-14, 2019, I already covered in a previous post here. This post covers other things that happened on Tuesday and Wednesday before the start of the Festival.

As usual, coming up, I took the train. Part of the plan was that my wife and daughter were driving up on Thursday, which meant I could take a small bag on the train, since they could bring the rest of my stuff later. Great in theory, in practice, not so much. The problem was the bag was just too small, so I had to take another small bag that was completely overstuffed. It must have been one that I had used at Comic-Con, because there was an Edgar Allan Poe baseball card in one of the pockets.

The train ride was nice. The part of the ride going through North San Diego County runs right along the ocean, and you're looking out the window at people surfing for twenty minutes of the trip.

While I was on the train, I was tweeting back and forth with a woman named Tricia, or at least I think that's her name. I reverse engineered it from her Twitter handle. She and her husband we're coming in from Chicago on the train, and they were coming through Union Station, LA, at the same time I was riding up on the train from San Diego. Later, after I checked into my Airbnb, I went to the Roosevelt Hotel, and met a woman named Elizabeth and a couple from Chicago, who had just come in on the train. It didn't dawn on me until much later that the woman in the couple was the same woman I was tweeting with.

Also, on the train, I remember tweeting with Chris from Austin, Texas. He was saying something about coming into Los Angeles, bringing in a couple of keys, which I wasn't sure, but might just be legal at this point. On a related note, the last part of the trip from San Diego is a 20-minute subway ride to Hollywood. On the train next to me, a guy was rolling a doobie, which is legal. Some transit cops talked to the guy, but then left him alone. I assume they just told me he couldn't smoke it on the train, but were okay with the rest.


The check-in at the Airbnb was painless, at least once I figured out where the place was. The Airbnb was kind of a cool Hollywood-themed apartment, I told the guy renting it that I was in town for the TCM Film Festival, and he pointed out a piece of art on the wall. It was a framed program from the Oscars award ceremonies in 1958.


Most of the rest of Tuesday was covered in my previous post, but I do want to talk about one thing, the wind. The wind on the Tuesday and Wednesday before TCMFF was about as strong if I've ever seen wind blow in California, and I've lived here my whole life. It was knocking big chunks of palm trees off onto Hollywood Boulevard. You might think I'm exaggerating, but look at the picture below. All I know is that everybody keeps saying that climate change is a myth. That's good because if climate change were real, we'd be in big big trouble.

Wednesday morning, I ran into one of my few complaints about our Airbnb. The shower seemed to defy putting out water at a reasonable temperature. First, it would be too cold, then too hot. Trying to get it just right involved the degree of precision on the valve that is usually reserved re-entry calculations on a NASA mission.

After a very uneven shower, I went to get coffee and ended up having breakfast with Elizabeth, whom I had met in the Roosevelt lobby the previous day.

In my survival guide posts, I had mentioned a way of getting in and out of the Hollywood Highland Mall while avoiding most of the craziness of Hollywood Boulevard. I decided to do a couple of videos of how that would work:


Sorry for the poor audio quality, The wind was still kinda insane when I did these. In all fairness, I did find out one day that it may not be any faster. A woman left the same theater at the same time as I did and went via Hollywood Boulevard, and we both hit the corner of Hollywood and Highland at the exact same time. I still like my way better because you don't have to duck crazies selling CDs and Party City Spider-Man.


I ended up having lunch with Paula and Tracy at 22 Degrees,the 24-hour restaurant at the Roosevelt Hotel. I had a really good hot dog, then again, for 14 bucks it should be.
A lot of Wednesday was spent on the various parties that we're going on, which I'm mostly covered in the previous post. Between the get-togethers, I spend as much time as I could hanging out at the Roosevelt, talking to TCMFF people. I do remember that there was one Tweet but I was especially proud of: 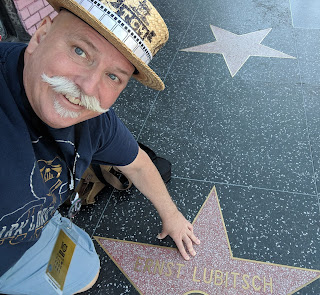 Late in the day, I did have a very basic, i.e., inexpensive dinner at Subway with Jeff. I think we both felt like we were going through too much money too fast. I had a feeling that if I didn't start economizing, I'd be out on Hollywood Boulevard with a Party City superhero outfit, charging tourists five bucks to take my picture.

Posted by Chris Sturhann at 8:55 PM No comments: