The Turner Classic Movies Classic Film Festival (TCMFF) Is scheduled for April 16-19 and many classic film fans are about over how the Corona Virus Disease (COVID-19) might affect the Festival. I'm going to start by saying that I am not a virologist. The closest I have come is my first real job out of college was a proofreader at a company that published science journal. I did proofread on numerous occasions a journal, titled Virology, but that was roughly thirty years ago. Thus, my expertise in virology is mostly limited to being able to recognize when certain words are misspelled.

I do have some experience running comic conventions, specifically Comic-Con International. Effectively, though I have no insight into the inner workings of TCMFF, but I feel it is safe to assume that the challenges TCM faces putting on TCMFF are fairly similar to the challenges Comic-Con faces running our events.

Though as mentioned before I am not an expert in virology, I do know a little about it, and I also know about media hype. First, if you want information about COVID-19, I suggest you go to cites such as the Centers for Disease Control and Prevention (https://www.cdc.gov/) and the (https://www.who.int/). These are the orgnaizations charged with tracking COVID-19 and protecting the public from it. These sites will give good information without trying to color it with worst-case scenarios that the 24-hour news media thrives on.

Before we move on, let's look at one of the bits on info you will find in the mainstream media. The following map was saved from https://www.arcgis.com/apps/opsdashboard/index.html#/bda7594740fd40299423467b48e9ecf6?ocid=eventhub (got there from a link from MSN News). By the way ArcGIS.com is a geographic information service, not a news or health organization. 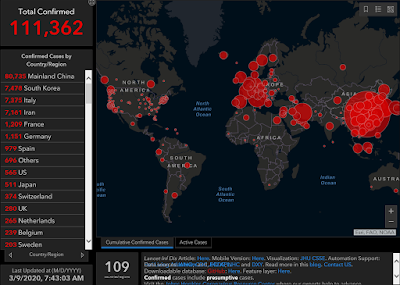 Looking at this map, Holy Moses, it's frightening. If each one of these red dots was a nuclear bomb, it would spell the end of life as we know it. Fortunately, the dots do not represent nuclear bombs. For example, the red dot in Western Australia, represents two cases (per https://www.health.gov.au/news/health-alerts/novel-coronavirus-2019-ncov-health-alert as of 11:00 hrs on 9 March 2020).

Still, the map is pretty scary. Let's see what happens when you zoom in on Los Angeles. The following is as far as the map will let you zoom in, before the dots disappear. 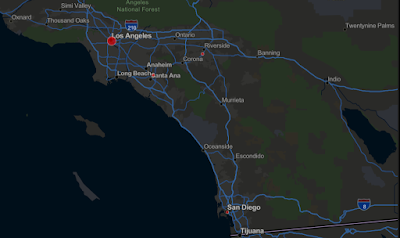 The large dot in Los Angeles represents (according to the Los Angeles County Board of Health, 9 March 2020) 11 cases. The dot in San Diego, where I live (according to the San Diego County, Department of Health of and Human Services, 6 March 2020) represents two cases, listed as, "Individuals on repatriation flights (2/5/20 and 2/7/20) from Wuhan, China under federal quarantine at Marine Corps Air Station (MCAS) Miramar."

TCMFF will be held in Hollywood in Los Angeles County. Los Angeles has a population of 10.6 million people and has reported 11 cases of COVID-19. That is a number I can almost do the math on in my head, slightly less than 1 in a million (1 in 963,636 to be exact).

TCMFF and the COVID-19 Outbreak

First off, I have met quite a few of the people who work for TCMFF. They are good people. I am sure that none of them want to put anyone in danger. I am sure they are monitoring the situation very closely. I am also sure that if a bona fide health organization suggests they cancel, they will do so. Now, I know what you are thinking. Why not just cancel it anyway, just to be safe?

Well, if you ask me, one in a million is a risk I am willing to take, and that seems like a reasonable amount of risk for not cancelling TCMFF, at least at this point in time. There is another reason for not cancelling.

Money. TCM stands to lose a whole lot of it if they cancel, especially if they cancel right now. Figure every penny that has been spent to have people work on the Festival is just gone. You can't go to your employees and say, You know that project that you have been working on for 40 hours a week for the last however many months, we need that money back because TCMFF isn't happening this year.

Some things probably aren't that big of a deal. Presumably, film rentals, you don't show the films, you don't have to pay for them. Other things, not so much. You have blocked out rental of several theaters months in advance, do you get the money back that you put down to reserve those theaters? Probably not, you might get some of the money back, but it's unlikely that you would get all of it back. Hotel reservations, hotel function space reservations, and flight reservations would likely work the same. Just about anything where a deposit has been made, getting all of the money back is going an uphill battle, especially if you are cancelling just to be safe.

It's a different situation if the California Department of Health, acting on info from the Centers for Disease Control, tells you that you need to cancel. Then, you have a better chance of the getting money back, but it's unlikely that TCM would get all of it or even a large portion back.

Another issue that you might not have considered.  I think the credit card fees on normal transactions is 2.9%. TCM already paid the processing fee, when the passes sold. TCM figured that into the cost of the pass. It's the cost of doing business. If they have to refund everybody's money, they get to pay those fees again. Now, 2.9% might not seem like a lot but on a $749 Classic Pass, it's about $20 times however many passes they sold. It would be close to $60 on a Spotlight Pass. These fees would add up quickly.

I am confident that TCM has the best interest of its fans and the Festival in mind. At this point in time, deciding to continue with the TCMFF is the right decision.  I am sure TCM will continue to make the right decisions. Unless the situation gets a whole lot worse, next month, we're going to have a great time and another great TCMFF.
Posted by Chris Sturhann at 11:03 PM No comments: