What a Character Blogathon: Theresa Harris

This post is part of the 10th Annual What a Character Blogathon, hosted by, Outspoken and Freckled, Once Upon A Screen, and Paula's Cinema Club. 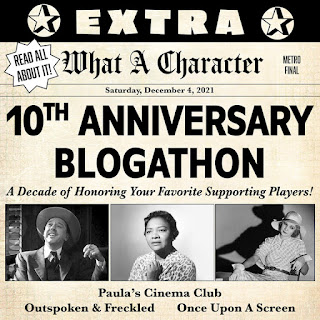 If the world was fair, Theresa Harris would have been a star, not a character actress, but as we all know, the world is not fair. As unfairness goes, people of color bear brunt of unfairness far more than their white counterparts. Theresa Harris had the looks of a movie star and could sing and act like a movie star, but she was African-American, which meant she usually played maids, often without screen credit.

Theresa Harris was born on New Year's Eve, 1906, though some sources say 1909, in Houston, Texas. She studied music as a child in Houston, before her family moved to Los Angeles when she was 11. After graduating from Jefferson High School, she studied music at the UCLA Conservatory of Music and Zoellner's Conservatory of Music, before joining the Lafayette Players, an African American musical comedy theatre troupe. Originally, she had aspirations of becoming a concert singer, but then switched to acting after being cast in an uncredited singing role in Thunderbolt (1929), video available here.

Theresa Harris' first credited and arguably her best role came in the Pre-Code Baby Face (1933) opposite Barabara Stanwyck.  Harris plays Chico and works in the small-town speak-easy owned by Stanwyck's abusive father. After Harris is fired for breaking dishes (and Stanwyck's father is killed when his still explodes), Stanwyck and Harris take to the road together. What makes this unique is that is that throughout the film they remain friends and confidantes. Though later in the film, Harris appears in a maid's uniform, she is probably the best dressed maid in all of classic film, and the two still maintain an equitable friendly relationship, very unusual even by racy progressive Pre-Code standards. The song "Saint Louis Blues" is used throughout the film with Harris providing vocals twice, including the scene where Stanwyck seduces a railroad bull in a boxcar to gain the pair passage to New York. 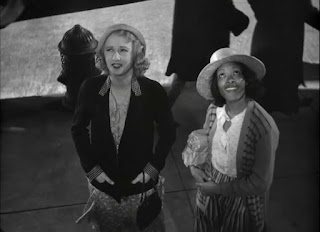 Hollywood has always had a habit of repeating themselves, especially when something is a hit. Three years after Baby Face, in another Barbara Stanwyck film, Banjo on My Knee, Harris again got to sing "Saint Louis Blues," this time in a full production number backed by the Hall Johnson Choir, video available here.

Often in the classic era, actors of color were required to speak in an unrealistic uneducated black dialect, and Harris could "Sho' nuff" do this with the best of them as she did opposite Bette Davis, in Jezebel (1938). However, Harris often stood out from other African-American actors by speaking perfect English in her film work.  I have nothing to support this, but I'm convinced that when given a role, she first read her lines in standard English to see if the director would let her could get away with it. Imagine the gall at the time, a colored woman speaking correctly. I also imagine that she lost work due to this. Again, I have nothing to support this, other than a very strong feeling that this was the way it went down.

All, I know is that she when was allowed to do so, she put her own personality in what otherwise would be throw-away roles. The racist stereotypes of the time played for easy laughs with the racist audiences. Actors of color almost always played an exaggerated version of how white people thought black people should act. By having the courage and conviction to play herself, Theresa Harris came off as natural, and her charm shone through, even in tiny roles. In one all-time of my favorite films, The Big Clock (1948), she appears briefly letting her light shine as the Stroud's family maid. Obviously, director John Farrow (Mia's father) didn't have a problem with this. Me, I much prefer this tiny uncredited role to her "better" credited performance in Jezabel.

I read somewhere that when Theresa Harris films would play in black neighborhoods, theater owners would list her name on the marquee with title of the movie, because in her two minutes of screentime, she was more of a draw to black audiences than anything else Hollywood could offer. Her importance to the African-American community is also evidenced by a cover story which appeared in Jet magazine, September 11, 1952, available here.

Three of Harris' best roles came under the direction of Jacques Tourneur in the 1940s, two back-to-back performances in the Val Lewton horror films, Cat People (1942) and I Walked with a Zombie (1943) and four years later in Out of the Past (1947). All were relatively small parts, which more or less sums up here entire career.

In Cat People, she plays a waitress, Minnie. Although she speaks slang in this role, it's not the Sho' Nuff colored slang, but standard American slang, as you would expect from a waitress in greasy spoon restaurant. It's only a few short scenes, but her interactions with Kent Smith and Jane Randolph, regulars at the restaurant, are natural and flawless, she even gets a witty rotort.

In I Walked with a Zombie, she plays a servant on a sugar plantation on Saint Sebastian in the Carribean. Francis Dee plays a nurse hired to care for the mistress of the plantation, whose illness has left her near comatose. Again, playing a servant, Theresa Harris has great scenes with the Dee, in particular, the one where she introduces her to her infant nephew, and afterwards, the conversation takes a dark turn to voodoo.

Possibly, the most unique role in here career is her small part in Out of the Past. Theresa Harris plays, you guessed it, a maid, Jane Greer's ex-maid to be specific. Robert Mitchum has been hired to find Greer, and he tracks down Harris in an all black bar. The scene lasts only a minute or two, but it's one of the few times I've ever seen black people relaxing in a club, in an otherwise all white movie. It's actually quite refreshing (image below taken from the Jet article mentioned above). 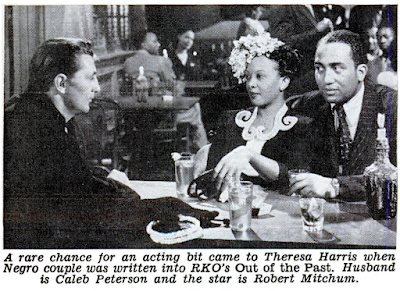 I've saved the best for last, a film I had never seen until just today, The Flame of New Orleans, a period comedy from 1941. Theresa Harris plays Marlene Dietrich's, I'm not going to mince words, slave. Marlene Dietrich's character had been in Europe before the start of the film, and you could argue that she was a servant, not a slave, but being set in New Orleans in the 1840s, I'm going to go with slave. Putting that issue aside, it's a great film and a great role for Harris.
Marlene Dietrich plays Countess Claire Ledoux, a glamous woman who manipulates all the men around her. Though a servant/slave, Theresa Harris is more of cohort. She lies for her, spies for her, and helps manipulate Dietrich's would be lovers. In Baby Face, Theresa Harris and Barbara Stanwyck are more of less equals, but Harris is just along for the ride. In The Flame of New Orleans, Harris is less equal in terms of society, but more of a partner in crime in the context of the film. She even gets a love interest in the form of Clarence Muse, another slave/manservant. This very funny film. Theresa Harris is in it a lot, and she steals every scene she's in. 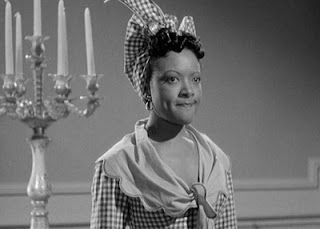 #####
Theresa Harris retired after an uncredited appearance in The Gift of Love (1958). Per several sources, she invested her income from acting well and was able to live comfortably until her death in 1985. As a footnote to her long career and her struggle to get decent roles in a Hollywood that had no place for her, playwright Lynn Nottage, inspired by Harris' performance in Baby Face, wrote, By the Way, Meet Vera Stark. This off-broadway play is a take on 1930s Screwball comedies, featuring a strong willed African-American maid who is also an aspiring actress. By the Way, Meet Vera Stark was nominated for several Drama Desk awards in 2012.
Posted by Chris Sturhann at 3:37 PM 4 comments: