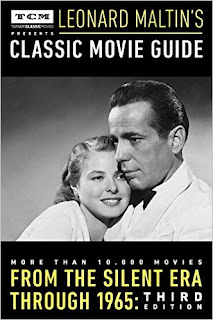 Posted by Chris Sturhann at 10:07 AM No comments:

Late last month, TCM announced a new #LetsMovie campaign, with a #LetsMovie holiday scheduled for September 19. Normally, I would be all over this, but this has been a very busy month or so. The main thing that made it so busy was an event that straddled the #LetsMovie holiday, Gaslight Gathering, a steampunk convention held September 18-20.

Oddly, the theme at this year's convention was Gaslight Goes to the Movies. Now, for me, going into a steampunk convention, means one thing, well, actually multiple things, projects. The big project this time around was a steampunk laptop, that sadly I fell short of finishing. The other project, or more accurately lots of little projects involved something else, an all-male steampunk water ballet/tribute to Busby Berkeley to be performed in the pool at Gaslight Gathering.

I came up with the idea about two or three months ago. Obviously, a bunch of guys trying to do the “By a Waterfall” number from Footlight Parade wouldn't work, but if we did the choreography from the pool scene in Caddyshack, that just might. I figured for it to work, we needed to have at least 12 guys and probably no more than 20.

They would all need to be outfitted for a steampunk water ballet:


I came up with a name for the group, The Steam Punk League for Aquatic Shenanigans (S.P.L.A.S.H.). I did both a web page and a Facebook page. Recruiting was another issue. You'd be surprised how tough it is to find a dozen guys willing to perform a Busby Berkeley number in public. Okay, maybe that isn't all that surprising. In addition to the web/Facebook pages, I posted on the Gaslight Gathering page, went to local steampunk events, and had people I know in Arizona spread the word.

By about two weeks out, I had exactly 12 guys lined up. That was enough to do it, provided they all showed up. About that time was when people started to back out. Three cancellations when we were already at the bare minimum to pull it off. I tried to call in favors from friends who weren't even into steampunk. The best I could do was, one agreed to do it (made him a suit, only to have him not show up), and another hemmed and hawed and ended up showing up anyway ready to go. I also managed to guilt another friend into it. He was already at the convention, and I had all the stuff for him to wear.

The plan was to do a rehearsal in the pool on Friday night and then the real performance on Saturday. I was deathly afraid that it was all going blow up on me. Only four or five guys would show up, and they'd all be mad at me because they put in the effort and we didn't have enough to pull it off.

Friday came and during the day, a handful of people said they were looking forward to watching, which kind of blew my mind because I couldn't say for sure that we'd even be able to do it. For the rehearsal, we got seven people out. There were a handful of others who had said they'd be there but couldn't make the rehearsal. The Caddyshack choreography had two circles. The plan was to have the guys at the rehearsal do the inside circle, and anyone who couldn't make it do their best to fake the outside circle with no practice. Not a good plan, mind you, but a plan. Oddly, about 20 people came out for the rehearsal, all wives/girlfriends and friends of the seven of us in the pool. At that point, I started to relax because I knew it would come off.

Saturday came, and it was packed. Almost every chair poolside was taken. People were standing everywhere including the second floor balcony and from what I understand more in the Steampunk Tea, looking out the 9th floor window. I couldn't imagine this event turning out any better than it did. So without any further adieu, we present the premiere performance of the Steam Punk League for Aquatic Shenanigans S.P.L.A.S.H. at Gaslight Gathering, 2015. With apologies of Busby Berkeley, here is the official video:

Postscript. After the event, I heard lots of people say, it was their favorite thing at the convention, no accounting for taste. We even had the woman who runs another steampunk convention, Wild Wild West Steampunk Convention invite us to do it again next year in Arizona. Maybe, that is my lot in life, promoting #LetsMovie/Classic Film one steampunk at a time.
Posted by Chris Sturhann at 4:38 PM No comments: