Lately, I have been streaming stuff on Netflix. My 21-year-old son, Matthew, asks, "Are you using the Wii U or the Roku."Me: The Roku. Matthew: Why aren't you using the Wii U?Me: Because then I'd have to learn how to use the Wii U.Matthew: It's made for children, Dad.
Posted by Chris Sturhann at 9:31 AM No comments:

The Railrodder – Buster Keaton’s Last Silent Film from 1965, Wait, What? 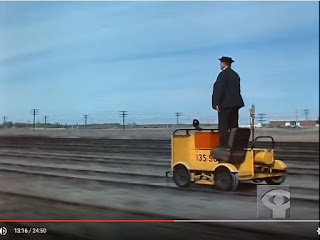 In The Railrodder, Buster Keaton is a in London reading a newspaper. He sees an ad that says, SEE CANADA NOW! He throws away the paper and jumps off a bridge into the Thames. The next shot he is emerging on a beach in Nova Scotia.  After seeing a sign pointing West and saying Pacific Ocean 3982 ½ miles, he starts to walk along the railroad tracks. He comes on a speeder, an open one seat railroad maintenance vehicle. The seat looks comfy, so he decides to take a nap and accidentally puts it in gear. Off he goes. The rest of the film is a series of gags, following him across the continent.

The Railrodder is definitely a silent film. There isn’t a single word of dialog, only music and overdubbed sound effects. The speeder in addition to having an inexhaustible fuel supply also has a Tardis-like storage cabinet. A running gag throughout the film is him pulling everything from his signature pork-pie hat to a tea set to a blanket and pillow from the tiny cabinet. Keaton celebrated his 69th birthday during the filming. While he is not falling off any buildings, he is clearly doing his own stunts, I presume with the exception of the jumping off the bridge. He certainly had not lost his feel for physical comedy.

The Railrodder is credited as, Written and Directed by Gerald Potterton. Watching the documentary, Buster Keaton Rides Again, it’s clear that he wrote/improvised most of the gags and surely co-directed with Potterton. I honestly don’t think he cared about the writing/director credits. The documentary clearly shows how he worked. The Railrodder is a wonderful short film.

I have embedded The Railrodder below:


Both the The Railrodder and Buster Keaton Rides Again are available for streaming free from National Film Board of Canada’s YouTube page at the links below:

Posted by Chris Sturhann at 3:39 PM No comments:

When you have to shoot, shoot, don't talk – What a Character Blogathon: Eli Wallach

Eli Wallach was born on December 7, 1915 in Redhook, Brooklyn, New York to the only Jewish family in an otherwise Italian neighborhood. Oddly, the root word his surname comes from, Wlochy, is the Polish word for Italy. He attended the University of Texas in Austin. Though the university didn't have a Dramatic Arts department, he performed in many plays in the student drama club. In one play, he performed with both Ann Sheridan and Walter Cronkite, the latter of whom he remained friends with for over 70 years.

After being drafted into the Army in WWII, he served in the Army Medical Corps and achieved the rank of Captain. After the War, he became a founding member of the Actors Studio, and he studied with Marlon Brando, Montgomery Clift, Sidney Lumet, Marilyn Monroe, and the woman he would soon marry, Anne Jackson. He and Jackson remained married until his death in 2014. Wallach made his Broadway debut in 1945 and won a Tony Award in 1951 for his role in the Tennessee Williams play The Rose Tattoo with Maureen Stapleton. Through the 1940s and into the 1950s, he worked in both theater and television. 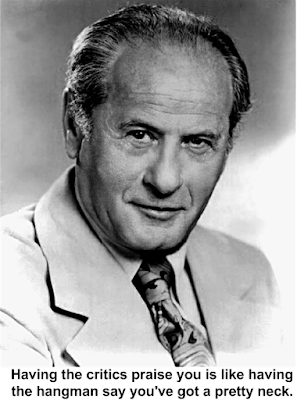 Wallach made his film debut in the 1956 Elia Kazan film, Baby Doll, with Karl Malden and Carroll Baker. The film was nominated for four Academy Awards and four British Academy of Film and Television Arts (BAFTA) Awards. Wallach won the BAFTA Most Promising Newcomer Award for Baby Doll. He is probably best remembered for his roles of Calvera in The Magnificent Seven (1960) and Tuco in The Good, the Bad and the Ugly (1966). After starting in films, he continued to do theater in between film and television roles.

Wallach was one of three actors to play the supervillain, Mr. Freeze, in the 1960s Batman TV show. He was in very good company. The other two were George Sanders and Otto Preminger. He said that he received more fan mail for Mr. Freeze than any other role he ever played. He continued to work in both film and television well into his 90s. Later in life, he had roles in the numerous films including Mystic River and The Godfather: Part III and TV series including Murder She Wrote, L.A. Law, Law and Order, and Nurse Jackie.

I'm going to look at a total of four roles, my two favorites from his prime and two from later in his career. 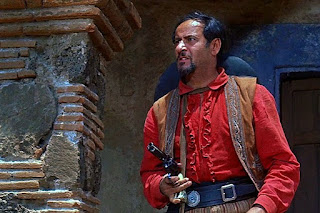 The Magnificent Seven was a remake of the 1954 Akira Kurosawa film, The Seven Samurai. Eli Wallach plays the outlaw, Calvera, whose gang terrorizes a small Mexican village. When approached to do the film, Wallach wasn't impressed. In The Seven Samurai, the head bandit was just a guy with an eye patch on a horse, he thought. Director John Sturges told him to read the script. Wallach did and realized that even though after the first scene, his character doesn't appear for another 35 minutes, that whole time the movie revolved around the character.

The film opens with Calvera and his men robbing a meager Mexican village of food and supplies. Through all of this, Wallach talks to the villagers and somehow manages to sound magnanimous. Not that he is, but he makes you think he really believes he is being magnanimous. It adds dimension to what otherwise be just be a ruthless character. Every scene that he is in, Wallach is riveting. Some of the best lines in the film are his, and he just nails them. He has said in interviews that he chose certain items for the character, like the gold teeth and red silk shirt. He wanted to show what a man like Calvera would spend the money he stole on. It turns out that Wallach's gang in the film, played by Mexican actors more or less adopted Wallach, taking charge of his horse and gun, and not letting the crew give them to him unless they checked them first. Wallach said that he was so impressed with the Elmer Berstein score, that if he heard it while making the film he would have ridden his horse better. 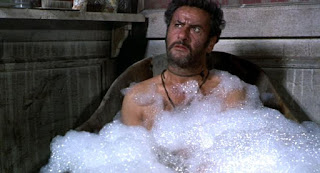 In The Good the Bad and the Ugly, Wallach plays Tuco, "the Ugly" from the film's title. In a film like The Good the Bad and the Ugly, it's almost hard to say who the good guy is. Obviously, it's Clint Eastwood, but he is so far into anti-hero territory that he is very little different from the "bad guys." Wallach's Tuco is an utterly reprehensible character. He is vicious, cruel, and cowardly. Yet through all of that Wallach manages to make the character likable and has you pulling for him.  In the scene in the gun store, all of Wallach's actions were unscripted. He knew so little about guns that he was instructed to do whatever he wanted. I just rewatched it last week, and the scene was brilliant. In the film, Wallach's character wore his gun on a lanyard around his neck and then tucked it into his belt rather than using a holster. This was Sergio Leone's idea, because Wallach said he had trouble putting his gun back in the holster without looking at it, something that drove John Sturges crazy on The Magnificent Seven.

When Wallach first arrived in Madrid for fliming The Good the Bad and the Ugly, all of the hotels were full. Clint Eastwood invited him to stay with friends he was staying with. The two of them ended up sharing the same bed. Later Wallach's wife Anne Jackson told him that he could tell everyone that he was the only man to ever sleep with Clint Eastwood. During the filming, Wallach barely spoke any Italian, and director Sergio Leone barely spoke any English, so they spoke to each other in French. Still, they had similar senses of humor and got along well, and the end product speaks for itself. 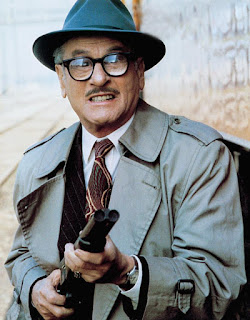 In Tough Guys (1886), Wallach plays Leon B. Little, an aging hitman, who had been hired to kill Burt Lancaster and Kirk Douglas and has waited 30 years while they were in prison. I love Tough Guys, but I'll be the first to admit that almost 30 years later, it looks very very dated. Still, it's worth a watch if only to see Lancaster and Douglas on screen for the last time together. But another reason is to see Wallach, a senior citizen hit man who can barely see, presumably from cataracts. Most of the humor surrounding his character involves him losing his glasses and not being able to see well enough to find them, making him pretty ineffectual as a hit man. Still, he's great in the role and a huge asset to the film. He plays it straight. He plays it well, and that makes it all the more funny.

Wallach: I wanna get a hundred of those coppers.
Burt Lancaster: There's only fifty Leon.
Wallach: So? I'll shoot 'em all twice!


Finally, I watched Wallach in Murder She Wrote of all things, from an episode called "A Very Good Year for Murder" from the fourth season. I chose this mostly because it was available on Netflix. It was the first episode of Murder She Wrote I have ever seen all the way through. My wife came in and said, "What the hell."

In addition to Wallach and Angela Landsbury (duh), the episode also had John Saxon, Billy Zane, and Grant Goodeve. All in all, it was good. A big part of that was Eli Wallach as Savatore Gambini, the patriarch of a well-to-do wine raising family in the Napa Valley. He was great. I'm probably not going to be watching a whole lot of the series, but still it was well worth watching this one episode. I think that is the sign of really great actor, he makes whatever he's in that much better. Old or young, that's what Eli Wallach did.

This post is part of the fourth annual What A Character Blogathon, hosted by:


See their sites for more posts in the series. 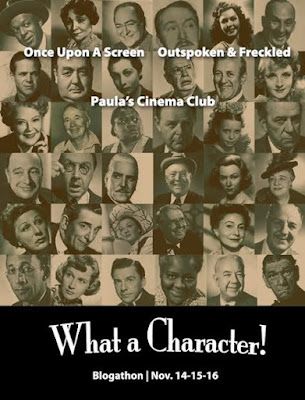 I only put in captions on a handful of these that you'd really be hard-pressed to figure out what they are without them. If they look Roman, they are probably from Ben Hur.