As we all know, the Turner Classic Movies Classic Film Festival (TCMFF) had to cancel because of the COVID-19 pandemic. Naturally, this is a huge disappointment. We're all going to miss seeing all our film cronies and hanging out and spending the better part of week geeking out about old movies.
TCM in grand style has decided to respond with a virtual Festival featuring a special weekend of programming films from previous Turner Classic Film Festivals, TCMFF Special Home Edition. Plus, many in the TCMFF community gave responded with virtual events to take the place of some of the social interactions we'll be missing by not being in the same place at the same time. With any luck, there may be more hanging out than in a normal year because we're not all running from theater to theater trying not to miss anything.

Another thing is that we don't have to make those agonizing choices when the schedule drops. Inevitably, there are always spots in the schedule where there are two or three films you want to see playing opposite each other. In years past, I have done my pics of TCMFF schedule in NCAA tournament bracket format. Frankly, I missed doing them this year. Then I thought, maybe I can do them anyway.

Next week, the TCMFF Special Home Edition will feature 45 film/programs. NCAA tournament brackets work best in multiples of 4, 8, 16 and so on. The number 45 is just shy of 48 making for three brackets of 16. The three empty spots I have set up as passes. I printed out a copy of the schedule, and cut out each film or program event onto a separate slip of paper. Then I put them in my hat, my TCMFF hat, and drew them out one at a time to put in the brackets. The first one chosen in each bracket got a "by" in the first round. 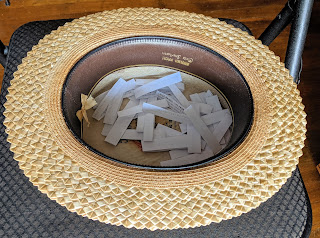 From there, it's simply a matter deciding who would win in each contest. Obviously, this is not a time machine. Some of the programs are interviews stars who have since passed away. I don't think it would be a fair to imagine I could go back in time and see them while they were still with us. This is just looking at these films and events as they are now in the Pandemic of 2020 and choosing what I think is best.

For the sake of brevity, something I'm not very good with, I'm going to limit myself to discussing just a handful of the most interesting contest in each bracket for the first two rounds. So without further ado, I give you my 2020 TCMFF Social Distancing Madness picks. 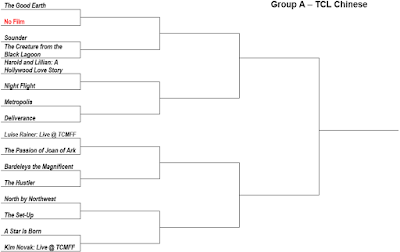 I'm not a fan of The Good Earth. It's a good thing it got the round one "by" because it never would have survived. Next, The Creature from the Black Lagoon takes on Sounder. Sounder is a good film but hey, it's up against The Creature from the Black Lagoon. Another interesting battle is The Passion of Joan of Arc vs Luise Rainer Live, not because I am huge fans of either but because of ambivalence. The Passion of Joan of Arc is a very good film, but it's sort of like watching a snuff movie. Still not a fan of Luise Rainer either so Passion moves on. 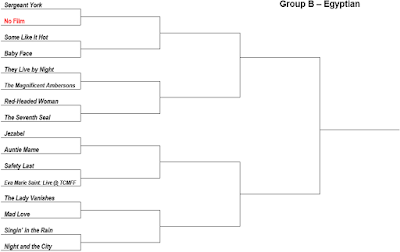 There are only two matchups to gave me a lot of trouble in this bracket. Jezebel vs. Auntie Mame, both great films in totally different ways. I saw Auntie Mame in the theater a couple of years ago, not many people there, but almost all of them were gay men who knew the film by heart, so it more than made up for the sparse attendance. This is a really tough decision. At the Festival, I don't know what I'd say but here I'm going to give it to Auntie Mame.

At the festival, Safety Last against Eva Marie Saint Live would be agonizing especially since I’ve always missed seeing Eva Marie Saint at TCMFF. She's still around so there's still a possibility of seeing her. Safety Last at the Festival would likely have a live orchestra. It would be a really really tough decision if we were in Hollywood. Social distanced, I will give it to Safety Last. 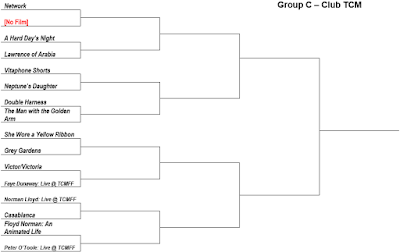 I saw both A Hard Day's Night and Lawrence of Arabia at TCMFF the years they played and both are awesome in their own ways. Here the edge goes to Lawrence of Arabia. A Hard Day's Night, fun movie, Lawrence of Arabia, great movie. Vitaphone Shorts was one of my favorites the year they showed it, easily moves past Neptune’s Daughter. I'm going to be there with bells on for this one.
Norman Lloyd Live against Casablanca. Again, I saw both at the Festival in years past. Norman Lloyd was awesome, he's so sharp and had great stories, my favorite story didn't even make it to the edited version they showed on TCM afterwards. Still, Casablanca is my favorite film of all time. I have to go to with Casablanca. 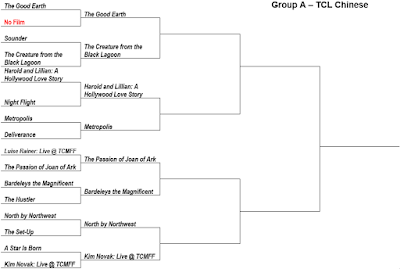 My toughest choice here is Harold and Lillian: A Hollywood Love Story vs Metropolis. Harold and Lillian is just a very very cute movie about a side of the movie industry that you never see. Metropolis I've only seen in the theater once back in the 80s, when they colorized it and did a New Wave score. Surely, at the Festival, Metropolis would have a live orchestra with added footage restored. That would probably be enough to do it for me. Guess what, Metropolis alone is still enough to do it for me. 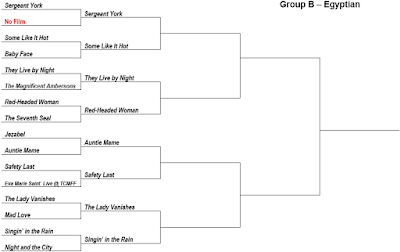 The toughest choice here is Auntie Mame up against Safety Last. Both are really great comedies, in totally different ways. I'm going with Auntie Mame. 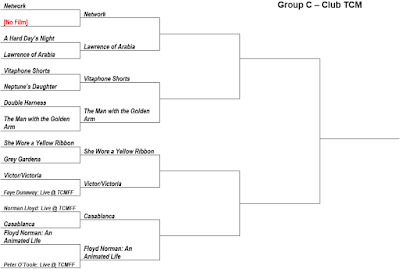 The toughest choice here is She Wore a Yellow Ribbon up against Victor/Victoria. Again both are great films in totally different ways. I'm going with Victor/Victoria mostly because no matter how many times I watch it, it always makes me laugh.

I just watched the trailer for Floyd Norman: An Animated Life, and wow, it looks good. At the Festival, this would be, Floyd Norman all the way. I've seen Casablanca a number of times in the theater. It's not exactly hard to do, even in a place like San Diego where they don't have a lot of theaters that show classic film. But we're not in Hollywood I have to go with Casablanca, because Casablanca. Don't get me wrong I'm going to watch Floyd Norman: An Animated Life. And if it's on it's on weird time and I can't watch it, I'm going to record it, but Casablanca.


Now the going gets tough, only 12 left. 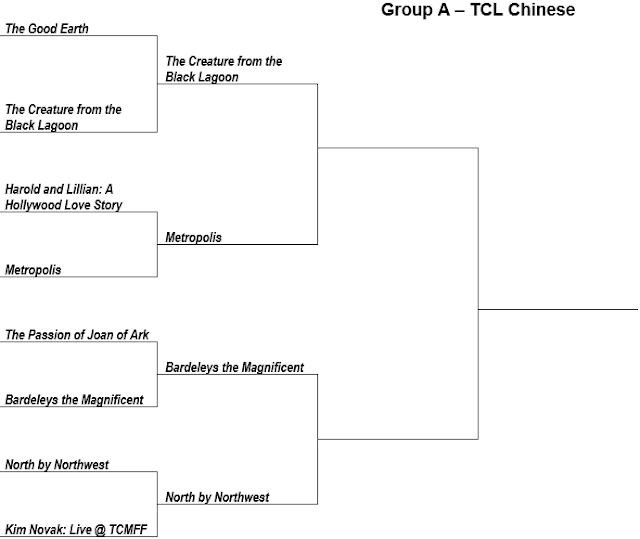 As luck would have it, there are only two science fiction/horror movies on the list, and of course they come up against each other. This is a really tough choice for me. I'm going with Metropolis mostly because they show The Creature from the Black Lagoon fairly regular.

I've never even heard of Bardelys the Magnificent. It made it this far mostly through luck of the draw. It's a newly restored version that was scheduled to show at the 2020 TCMFF. Up against the North by Northwest, Bardelys doesn't stand much of a chance, kinda like my high school basketball team playing Gonzaga, but it still looks mighty interesting. I'm still going to try to catch it. Starting at 10:45 Sunday night my time, not sure, I'll make it, but I will record it. Regardless, North by Northwest moves on. 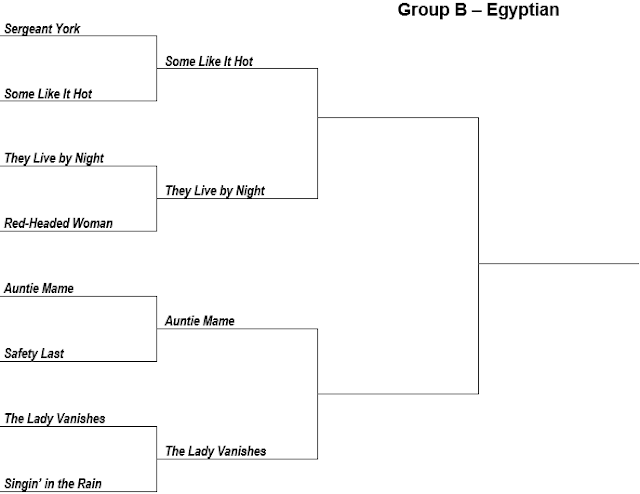 At the Festival, the next choice would be a really tough call. The Lady Vanishes is a great movie that you never get to see in the theater. But we’re not seeing it in the theater. Thanks, Pandemic. I like Auntie Mame better, and it moves on to the Final Four. 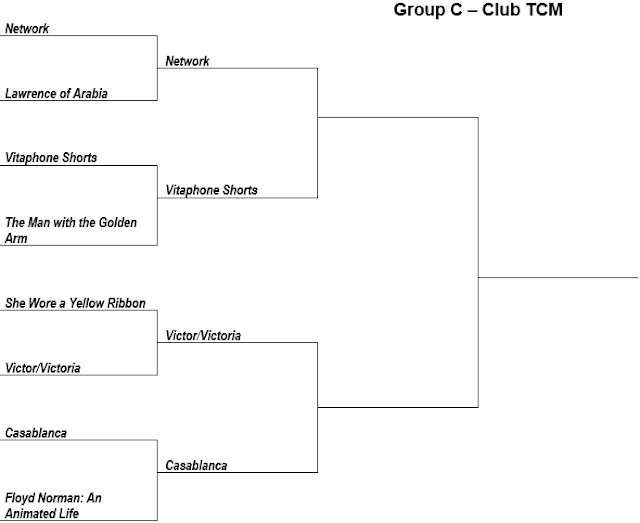 Vitaphone Shorts is like that little college in the NCAA tournament that nobody expects to go anywhere, but ends up taking out some of the top teams. Here it's no different, Vitaphone Shorts over Network.

This brings us to Victor/Victoria vs Casablanca. I think you know what I'm going to say here, Casablanca.

And then there were six. 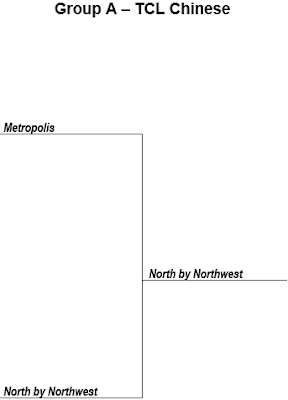 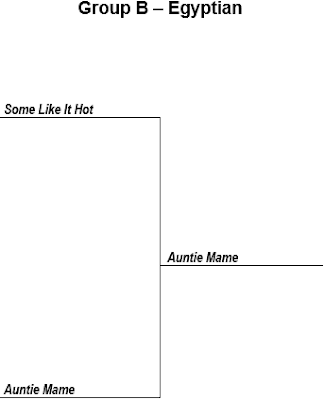 Another tough choice here, Some Like It Hot up against Auntie Mame. Frankly, I think Some Like It Hot is somewhat overrated. I definitely don't call it the greatest comedy of all time. It is a great movie and a very good comedy, but I really think Auntie Mame is funnier. Rosalind Russell for the win. 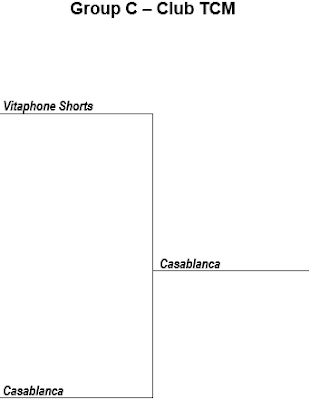 This one is a heartbreaker, my favorite film of all time, Casablanca, up against up against one of my favorite things I ever saw at any of the six TCM Film Festivals I've attended. Vitaphone Shorts was so cool, but here we go again, I have to go with Casablanca.

As I mentioned previously, for the fourth spot in the final four I was going to pick my favorite of the last round runner-ups. That honor goes to Vitaphone Shorts. I put Vitaphone Shorts in the lower left of the one bracket and then did a random draw (again from my TCMFF hat) to fill in the rest.

It is with great sadness that again I go with something other than Vitaphone Shorts. It comes down to I really think Auntie Mame is better, dammit. Cinderella story comes to an end.

Then we have Casablanca vs North by Northwest. My favorite film of all time against my favorite Alfred Hitchcock film. That's tough. Actually, no it's not. I knew going in that Casablanca was going to take it all.

That just leaves the final matchup of Auntie Mame vs Casablanca. This is like one of those championship games where it's a total rout. Auntie Mame is good, but good as it is and as much as I love it, it didn't really stand a chance here.


Thanks a lot for playing along. I hope to get to talk to you a lot of you next week and again IRL at TCMFF 2021. So long!
Posted by Chris Sturhann at 6:32 PM No comments: