Have a little extra time to kill in Hollywood at the TCM Classic Film Festival (TCMFF), this series covers a handful of my favorite destinations. 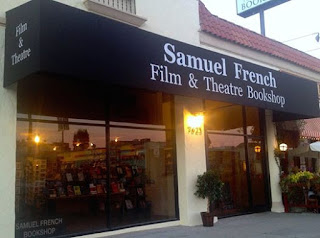 
Getting there from the Festival

Walking (about a 20 minute walk from the Hollywood Roosevelt).

Fastest way is: Take Hollywood Blvd. west. Turn left on Marshfield Way (Marshfield runs diagonal, so you save a block or so). Turn left on N. Formosa, then right on Sunset Blvd. From there, Samuel French Hollywood Bookshop is another 8 blocks west, at the corner of Sunset and Stanley.

Tip: If you stay on Hollywood Blvd. (instead of taking Marshfield), this will
take you past Temple Israel of Hollywood. I have no idea if this is worth the trouble. I just saw it on Google Maps and figured a synagogue in Hollywood is bound to have classic film/celebrities associated with it. Turns out I was right. According to Wikipedia, current and former members/congregants include: Hal B. Wallis, David O. Selznick, Al Jolson, Eddie Fisher, Elizabeth Taylor (converted to Judaism there), Sammy Davis, Jr., Leonard Nimoy, Jack Black, and Ben Stein. If you go this way, you probably should take a left on N. Gardner St. That's the first north/south street that goes to Sunset Blvd. without jogging. From there, turn right on Sunset, and Samuel French Hollywood Bookshop is 3 blocks west, at the corner of Sunset and Stanley. 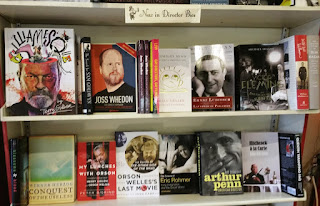 The bookshop is divided roughly in half into film and theater sections. The film section is awesome, broken into logical subsections, screenwriting, screenplays, directors, acting, cinematography, cult movies, etc. Most subsections had three or four floor to eye-level shelves worth of books including shelves dedicated to new titles in the area. I could have spent hours browsing. If you like books on current or classic film, it's definitely worth the trip.
Posted by Chris Sturhann at 1:27 PM