White Privilege and The Oscars

First, I'm going to define what white privilege means to me. I'll let you decide whether that is a fair definition. I am white. My wife is black. My father and my wife's father have both passed away, and they both had a lot in common. My wife's father rode his bicycle across America. My father rode his bicycle across Europe. They were both old enough to remember and be affected by the Depression. Both of them worked very hard and saved money most of their lives.

I went to a state university, which my father paid for, and got a bachelor's degree. While I was going to college, my mom used part of the money she got from my dad for the house to pay rent for my brother and I. My brother and I both had part-time jobs in college, but it was mostly to earn spending money. My wife went to junior college and got an associate's degree. She paid for college herself partly by working a normal part-time job and a second subsidized job at the college.

I have only touched on a couple of things here, education and wealth accumulated through real estate, the way most Americans acquire wealth. In my parents generation, my father (white) graduated college. My wife's father didn't attend college. In my generation, I (white) achieved a higher level degree, with less hardship than my wife (black). My parents (white) amassed 3 or 4 times as much wealth as my wife's parents (black). My parents were able to help my wife and I buy a house. Without them, I don't think we would have made it. Presumably, we will be able to do the same for our children someday.

Now, you may be thinking that my wife's parents could have bought in a white neighborhood. Honestly, I don't think they could have afforded it. Even if they could have, I grew up in that mostly white neighborhood. The first black family moved in across the street from us when I was about 10. As far as I know, they were the only black family for blocks around and for many years to come. There weren't any cross burnings. I was about 3 or 4 years younger than their youngest child, and while I don't remember any problems among the kids in the neighborhood, I don't remember their children ever having many close friends among the white kids, even though there were plenty their ages. And the adults, it was four or five years before they would even say, hello, when they drove up. This was San Diego in the 1970s.

Oh yeah, and speaking of cross burnings. About five years before my wife and I bought our house, we looked at another house. It seemed really low priced in a cool older neighborhood. It was a funky house and had this weird trapdoor to a basement in the living room. Very few houses in San Diego have basements. My dad suggested I talk to the neighbors. It turns out that part of town had been once a landfill. That weird basement had been the scale they weighed the trucks with. They took the scale out and built the house on top of the cement hole in the ground.

A few days later, I found out something else about the house. A co-worker lived in the neighborhood. She hemmed and hawed before she spilled it. She knew my wife was black said she remembered something about a cross burning in the neighborhood. She thought it was close to the house we were looking at. I went to the library and found a newspaper article about it. It happened in the mid-1980s. A black family moved in, and one of the neighbors didn't like it. He burned a cross on their lawn and attacked the black man who lived there with a machete. He went to prison for it. Turns out this cross burner lived three doors down the house we were looking at. The woman I worked with thought there were bikers living there at the time. We decided not to put in an offer. 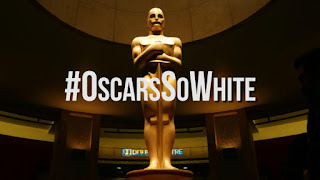 So what does all of this have to do with the Oscars? Do you really need to ask? The lack of color among Oscar nominees is just another aspect of white privilege. The best opposing explanation I've heard is for the lack of color at the Oscars this year, there weren't outstanding performances by people of color. And maybe there weren't, ignoring Straight Outta Compton, Concussion, Beasts of No Nation, and Creed. Oh wait, the Academy already did ignore those. That's why we're here.

I did a little informal unscientific study on actors/actresses. I did two google searches, top actors today and top actresses today, and looked for people with ethnic backgrounds other than white in the first five results for each search. Most of these links are some IMDB user's list, so possibly not the best source of information. But these are the links that display first when you google those two phrases. Also they seem to be fairly consistent. For example, Denzel Washington and Morgan Freeman were usually the first listed among black actors. Note that I included both Indian (country of India) and Pacific Islanders as Asian. For mixed race actor/actresses, often they were counted twice. For example, Dwayne Johnson, The Rock, is a mix of black (father Canadian of African American descent) and mother Samoan. Since I counted Pacific Islander as Asian, I counted Dwayne Johnson as both black and Asian. Here are the results:
Totals
*This is a little deceiving. At a glance, this seems close to parity. According to Wikipedia. 0.8% of  the American population is Native American/Native Alaskan (2.4 million people in 2008); however, almost an equal number (2.3 million in 2008) reported being part Native American/Native Alaskan, so if you add those in, you can almost double that 0.8%. Also there were no male Native American actors given, and all of the Native American actresses were mixed race.

Fewer actors/actresses of color among the top means fewer roles and fewer Oscar nominations. I can't believe we still need to have this conversation in 2016. Things are not going to change until Hollywood changes and stops casting according color. There are no black roles or white roles, just roles. Actors make their living playing people they are not. Let them do it. An alcoholic lawyer trying to rebuild his life is not necessarily white anymore than a tough street cop is black.

Sure, sometimes race is important. Doing a movie about Che Guevara, you might want to get a Latino to play him. Beyond that, what does it matter whether 007 is white or black? It doesn't to me. I had this conversation with my wife. She thought James Bond should be white, but suggested, why not have Daniel Craig as 007 team up with Idris Elba as 008. Then the next movie in the series could be Elba's. Sure, I could live with that.

A stormtrooper can't be black, says who? Fox News? Does it really matter what race Spider-Man is? Do radioactive spiders only bite white people. Would it be wrong to have a black Batman. Well, technically Batman's alter ego is a billionaire. Maybe, we need to keep him white a little longer and respect the privilege.
Posted by Chris Sturhann at 4:02 PM