31 Days of Oscar – Digging on the New Format

Every year, TCM dedicates the month of February (and a little bit of March) to their 31 Days of Oscar festival. Normally, I would say this is my least favorite month of the year for TCM. This year, they're doing something different, and I have to say, I heartily approve. This year, TCM is doing an A to Z theme. To me, it adds a random nature to the programming, sort of like putting your music player on shuffle.

Bear with me while I go off on a small tangent. I love listening to music in random order and being surprised at what is coming up next. However, I rarely use the random setting, because of the way the software is designed on most music players. Think of a playlist as a hat filled with songs. The music player grabs a song at random, plays it, grabs the next one, and so on. Think of a six-sided die. If you roll it you will get a random number between 1 and 6. But if you roll a die six times, you are probably not going to get all six numbers, 1 through 6. The number 3 might come up two or three times in those six rolls.

Most music players work the same way on random. Back to the hat full of songs, the music player grabs a song at random and plays it, but then it puts it back in the hat. The result is random, but it might not seem random. Say you have a playlist with 60 songs that runs four hours. If you listen to it for four hours, it's highly unlikely you will hear all 60 songs. Likely you will hear certain songs two or three times and many others not at all. You could listen to the playlist for 40 hours and still not hear certain songs.

Thus, when I want random, I play the songs in alphabetical order by song title. Technically, this is not random but it seems random when you're listening to it, and that's what's important. Likewise 31 Days of Oscar, done A to Z seems random, despite being in a definite order. Oh you run into the odd anomaly. For example, I have a New Wave playlist that has two versions of the song, "Ever Fallen in Love (With Someone You Shouldn't've)", the original by the Buzzcocks from 1978:

And the Fine Young Cannibals cover from 1986:

But that's fine because both versions are significantly different and stand on their own. Hmmm, that was a rather long-winded way of saying that 31 Days of Oscar, A to Z, seems random.

Likewise you do run into the same sort of anomaly on TCM. Today, TCM showed Imitation of Life, the 1934 version with Claudette Colbert, Louise Beavers, and Freddi Washington and the 1959 version with Lana Turner, Juanita Moore, and Susan Kohner. Like the songs above, both stand on their own, so it's okay to have both play back to back.

This brings me to my main reason for not liking 31 Days of Oscar as it has been done in previous years. While both versions of Imitation of Life are good and worth watching, I don't like either one of them all well. They are good movies and worth watching, just not my favorites, in fact, not even close. They are the type of movie that often get nominated and win Oscars (though neither version on Imitation of Life did win any).

What I have noticed anecdotally is that the Oscars tend to prefer the following:


Let's look at 1936, the big winners that year was Anthony Adverse with seven nominations and four wins and The Story of Louis Pasteur with four nominations and three wins. Both are drama and historical films. Other films released this year:


I'm sure I have seen both Anthony Adverse and The Story of Louis Pasteur, but neither is more that a blip on the radar. All of the other films listed for this year have left more of an impression.

For 1959, the epic-scale Ben Hur won eleven Oscars out of twelve nominations, the first movie to ever win that many (Titanic (1997) and The Lord of the Rings: The Return of the King (2003) both won eleven as well). I have nothing against Ben Hur, great film that deserves the credit. Other multiple award winners this year were The Diary of Anne Frank (eight nominations; three wins) and Room at the Top (six nominations and two wins). But let's look at what also came out this year:


Again, nothing against Ben Hur, great movie, but is it really that much better than Some Like it Hot or North by Northwest. I don't think so.

In 1954, the big winner was On the Waterfront with eight wins out of twelve nominations. I consider this a message film, but it wraps the message in a compelling story and great performances. It's what all message movies want to be when they grow up. Other multiple winners this year include, The Country Girl, Three Coins in a Fountain, and 20,000 Leagues Under the Sea (science fiction, God forbid, but it is historical, sort of), each with two Oscars. Other films from 1954:

On the Waterfront had a message and deserved the acclaim, but look at the other great films that were nominated only got one award or were nominated and went home with none.

In 1946, The Best Years of Our Lives was nominated for eight Oscars and won eight (including the Honorary Oscar to Harold Russell). Obviously, The Best Years of Our Lives was a product of its time, soldiers coming home from war and having to adapt to civilian life, and it resonated with what was going on. Other multiple winners that year include, Anna and the King of Siam, The Jolson Story, and The Yearling, each with two. Let's look at the other films from 1946:


First off, this was a great year for Film Noir. Admittedly, I have nothing bad to say The Best Years of Our Lives. It is a great film, but what about the others. In particular, The Blue Dahlia is a similar story, military men coming home and trying to adjust, but, because it involves a mystery and murder, it barely gets consideration. I'm not saying that it deserves some of the Oscars that The Best Years of Our Lives won, but the characters in The Blue Dahlia are struggling to adjust to life on the home front in much the same way. Back then, films about crime and criminals rarely won Oscars, despite the fact that they were establishing a vibrant genre so new that it only had been given a name that same year.

I honestly don't want to take anything away from the films mentioned here that won multiple Oscars. For the most part, they deserved them, but many great films didn't win Oscars or weren't even nominated. The A to Z format on 31 Days of Oscar seems to have given the programmers at TCM the latitude to spend more time on great films, rather than just the big winners. Often it is the films that go home empty handed that stand the test of time and become truly classic. To me. that's what it is all about.

Post-Script
This Saturday I will be posting in the 31 Days of Oscar Blogathon, hosted by Once Upon a Screen, Paula's Cinema Club, and Outspoken and Freckled. My topic will be, 3 Beekman Place: The Art Direction/Set Decoration of Auntie Mame. 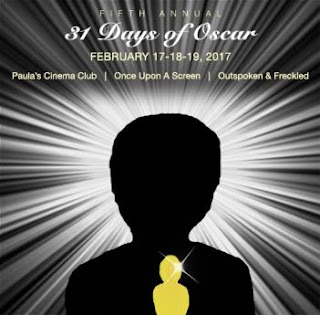 Posted by Chris Sturhann at 3:44 PM