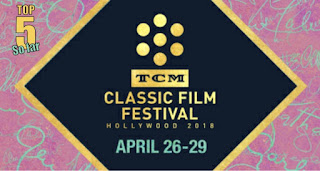 So far the TCM Classic Film Festival (TCMFF) has announced 13 films for the festival to be held April 26 to 29, 2018. I thought I would announce my top five picks of the films announced at this point. I'm doing this partly because whenever I do a post like this, TCM usually announces new info that totally negates what I just posted. Thus, in hopes of getting a new announcement about TCMFF that will render this post moot, I give you my top five picks. You're welcome.

* The Producers is the opening night red carpet screening and my pass doesn't include it, so it's off the table, for me anyway. 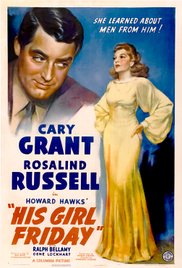 My logic is pretty simple. I've seen 10 of the 13 films, but none in the theater. His Girl Friday is a huge favorite of mine, and one of my go to, I'm bored, what am I going to watch now, pop in the VCR movies. To Have and Have Not is just a great movie, and to see Lauren Bacall in her movie debut with Bogart and a great supporting cast including another huge favorite Hoagy Carmichael, that is a must for me. The Set-Up is an outstanding film noir, that I only saw for the first time a few years ago for TCM's Summer of Darkness festival/class. One of my only problems with noir films is that many have similar storylines and themes, and they tend to blend together. The Set-Up is enough different that is stands out from the pack.

Slots 4 and 5 were a lot tougher, as I had a four-way tie among, Woman of the Year, Throne of Blood, Bullitt, and The Black Stallion. Though I love Spencer Tracy and Katherine Hepburn, Woman of the Year is probably my least favorite of their pairings, at least of the ones I've seen. Katherine Hepburn's character comes off poorly in the way she treats their adopted son and when she tries to become domestic. I also eliminated Throne of Blood, because the local art theater will sometimes include a Kurasawa film when they do their week of classic films three or four times a year. I hope it shows up there.

This leaves The Black Stallion and Bullitt. Frankly, I think The Black Stallion is a way better movie. Bullitt, though very cool, I have a number of issues with the plot, but the coolness factor is strong enough to just squeak into the top five.
Posted by Chris Sturhann at 10:53 AM