Order in the Court Blogathon - Witness for the Prosecution

This post is an entry in the Order in the Court Blogathon hosted by Second Sight Cinema and Cinemaven's Essays from the Couch. 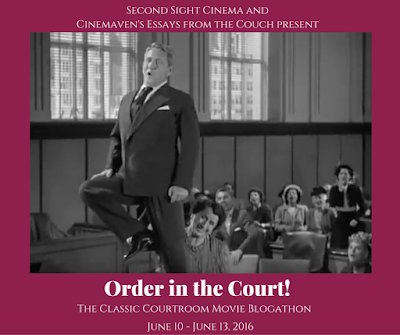 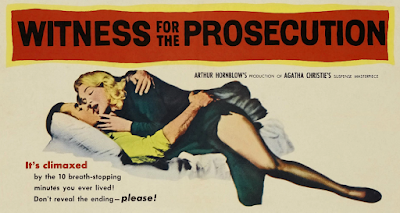 What can I say about Witness for the Prosecution other than it is a great movie. There is a surprise ending. That is all I'm going to say. Well, yes, I do need to discuss aspects of the plot, but I'll avoid even hinting at it. The end of the film was even kept secret to the cast and crew. According to IMDB, the principal actors did not learn the ending until the final day of shooting, when the last ten pages of the script was given to them. The film contains a disclaimer over the closing credits, asking audience members to not reveal the ending. It was reported that at a Royal Command Screening of the film, members of the Royal family were asked to promise to not reveal the ending. Even the movie poster urged viewers to not reveal the ending.`

Witness for the Prosecution is an adaptation of an Agatha Christie play of the same name, based on one of her early short stories. Christie said it was the only film adaptation of her work that she actually liked. Years later, she said similar of Murder on the Orient Express (1974). Tyrone Power said it was one of only three movies he was particularly proud of. The film was nominated for 6 Oscars:

Tyrone Power plays Leonard Vole, a man accused of murder, but who maintains his innocence. Charles Laughton is a lawyer fresh out of the hospital after recovering from a heart attack, under strict orders to avoid anything strenuous, such as a murder trial. After discussing the case with Power, Laughton believes him and agrees to take the case, at least partially to get out from under the thumb of his overbearing nurse, played by Laughton's real-life wife, Elsa Lanchester. Power is something of a ne'er do well, unable to hold a job, and is accused of murdering a rich widow he befriended. Tyrone Power's wife (Marlene Dietrich) is a former cabaret singer, that he rescued from the rubble of Post-War Germany, and she is portrayed as a gold digger. 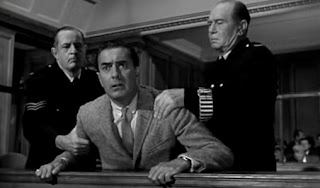 From what I read, critics thought that Tyrone Power was too old for the role of Leonard Vole. It never even occurred to me. He seemed age-appropriate for Marlene Dietrich (in reality, he was more than ten years younger than Dietrich). According to IMDB, Dietrich had a crush on Power during the filming, and Billy Wilder said that Charles Laughton had a crush on Power as well. Personally, I like him in the role. He is good as the bewildered man accused of a crime he didn't commit.

Witness for the Prosecution has to be my favorite role for Marlene Dietrich. She is absolutely great. Looking at the other nominees for best actress that year, it's a crime that she was not at least nominated. Charles Laughton is brilliant as the lawyer. His character combines a keen legal mind with the personality of a mischievous little boy as he sneaks brandy and cigars, whenever his nurse's back is turned. Elsa Lanchester is one of my favorite character actress. She has a way of making an impression in a small role and that is surely the case here. Rounding out the cast are Norma Varden as the murdered widow and Una O'Connor as her maid. Both are great. 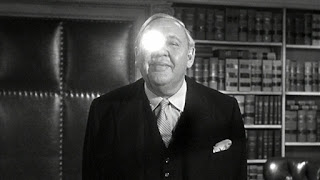 I don't want to discuss details of the case for fear of giving away too much of the plot. It is interesting that the film is set in England, to see the differences in their legal system, most notably the judge and barristers (lawyers) wearing wigs.

The twist ending is one of the best ever filmed. I totally did not see it coming. With a director like Billy Wilder, it's easy to overlook really great films over their more famous films. I think that is at least somewhat the case here. Billy Wilder has a way of turning genre films on their ears, film noirs that are about people who aren't really criminals or comedies with a sense of pathos. In Witness for the Prosecution, Wilder combines a murder mystery with interesting characters and tosses in a great ending. The results are spectacular and one of the best courtroom dramas ever put on film.
Posted by Chris Sturhann at 3:25 PM