Sunday at the TCM Classic Film Festival (TCMFF) started a little later for us. Since we only had three Falcons to give out on Sunday, we didn't have to get into Club TCM before it opened. That gave us about a half hour more sleep.

While we were getting ready in the morning, my 16-year-old daughter/Social Producer partner Jasmine said something super cool. I had originally planned to go to Holiday in Spain, but decided the transition would be too tough to get to the second block of films. I ended up switching to M*A*S*H, so I was sure I could get to The Kid on time. Jasmine said, "Oh good, because if you were not going to The Kid, I was straight-up going to ditch you." I was so proud.

My wife Mary went to the first two TBDs of the day, Double Harness and Shanghai Express, both of which she had been shut out of earlier. Jasmine and I went off to M*A*S*H. The thing I remember most about the introduction was a joke that Sean Cameron made. After welcoming the audience, he asked, why aren't you guys in church. Then continued with, if you're not going to church, shouldn't you be going to the screening of King of Kings.


Jasmine had never seen M*A*S*H at all, and I know I had never seen it in the theater. My goal in seeing it in IMAX was to see whether Sally Kellerman was a natural blond. Despite the huge screen, I still couldn't tell. If memory serves me, the interview with Elliott Gould was after the screening. What I mostly remember about it was that he seemed very modest and down-to-earth.

After the screening, Jasmine and I hid a Falcon at the Chinese Multiplex.

Next it was on to the restoration of The Kid. One of the problems they had with the restoration was finding a print. Charlie Chaplin had left the U.S. in 1951 for the premiere of Limelight in London. At the time, Chaplin had been under investigation by the FBI for subversive activities. He was critical of the Communist witch-hunt in Hollywood, and at least one Congressman was calling for his deportation. Chaplin had never become a U.S. citizen. When he left the country, Chaplin gave the negatives to a friend who destroyed them out of fear of being associated with Chaplin. Despite this, the new restoration was beautiful. Jasmine absolutely loved it. The first classic film she ever watched was, City Lights, and she said it made her heart feel all weird.

Jasmine's #TCMFF16YO review of The Kid:


Next, we hid a Falcon at the Chinese Multiplex, and Mary rejoined us for Horse Feathers. The introduction by David Steinberg was fun. We were sitting off to the side in the first row under where the hallway leads to the exit. I was able to get some really blurry pictures of him as he left. The one where he is closest, it's difficult to tell that you are even looking a human. The film was fantastic, absolutely hilarious.

When Harpo plays the harp, I stop seeing Harpo and I see a talented normal person 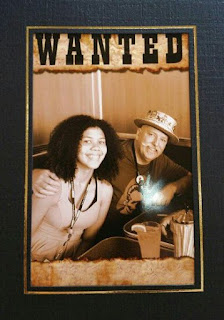 Afterwards, we went back to the hotel to change for the evening. We ended up going downstairs to Club TCM. We hid the last Falcon and caught up another Social Producer Christy Putnam. We did an interview with her and played ping pong in the little patio off the pool.


We also ran into Ana Roland:


Then we went back to the TCL Chinese Multiplex and did an interview with Kendall:


Finally, Jasmine suggested we do an interview with the statue outside of the theater. We both were a little loopy at this point:

Also I had made some buttons for the Festival of a couple of my own designs, and at this point, I was doing my best to make sure we didn't have to take any home.

I ended up talking to a woman, whose name now escapes me. I was explaining to her about Social Media and #TCMParty on Twitter. She said she didn't know anything about Social Media other than she had found this miniature Maltese Falcon that had something to do with Social Media. I was like, Oh, that was us. My daughter and I were the ones who did that.

Our last last screening was The Band Wagon. The host, Susan Strohman in her interview with Illeana Douglas, said that the shoe shine guy in the movie was a real shoe shine guy who had a knack for it. That was so cool as it was one of the most memorable scenes in the film. To me, The Band Wagon is sort of like one of those sci-fi films where you watch it for the special effects. The Band Wagon is not the greatest performance for Fred Astaire or Cyd Charisse or for Oscar Lavant for that matter, but the dance numbers are just so darn cool.

On the way back to the hotel for the closing night party, we stopped at Rite Aid for a snack, and it was like the Grinch had struck. There was hardly anything on the shelves, nothing left but some hooks and wire. The entire store had been picked clean.

The closing party was fun though it ended way too soon. When you're last screening ends at close to 10, midnight just comes way too fast. To compound matters, when the party shut down at 12:00, all of the bars in The Hollywood Roosevelt were closed. You would think that with the prices they were charging, they would want to keep charging them as long as possible.

Still the party was a lot of fun, talking with new friends and old. I even met a woman, Denise Mankarious, from San Diego who I'd been talking with online for years but had never met in real life. Jasmine only stayed for a little while. She is fine with hanging out with grownups in small groups, but a party with a whole bunch of them, not so much. If I'd had let her, she would have not gone at all.

It all ended too soon and not having a bar open wasn't working.  Ariel Schudson suggested we go to bar she knew, called Boardners. The Exodus was somewhat less than Charleton Heston would have inspired. Mary was wearing shoes, not meant for walking, so it ended up being just Ariel, Paula Guthat, and me. The drinks were good at about a third of the price back at the Roosevelt. Not a bad way to end TCMFF.
Posted by Chris Sturhann at 4:50 PM