I posted the following on Facebook the other day: 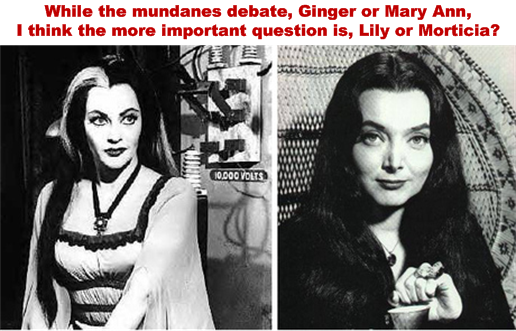 It was a whim, after my friend Aurora had posted a bunch of pictures for both The Addams Family and The Munsters. I didn't give it much thought. Just thought it was funny and added some text to a picture stolen from a Google image search. From the first comment on though, I realized that there was way more going on here.

Going on looks alone, I'd say they're pretty evenly matched. In my mind, Morticia has a better body, but Lily, a better face. Take into account personality, I'd say Morticia wins hands down. Gomez and Morticia were obviously doing it, whereas Lily and Herman were pretty darn asexual. I mean, seems like after they had Butch Patrick, they were like, "Yeah, we're done now."

But is that really Lily's fault?

I mean Gomez obviously knew how to please a woman. But Herman? Despite my belief that he would have had an enormous schwanstucker, he was probably a bad lay. Is that Lily's fault? What if Lily had married Gomez? She might have been every bit the sexual being that Morticia was? Lily might have been a dynamo with a white-striped hoochie? How hot would that be?

The more I think about it the more I think it is exactly the same question as Ginger or Mary Ann. Do you want the innocent girl next door (Lily/Mary Ann) or the hottie who's been around the block a few times (Morticia/Ginger). In all honesty, I don't know whether I could make that call. Being a man, I'd really want to have them both. But speaking from my own life, my wife, Mary, despite talking a good game when were dating, was definitely more of the girl next door type. We just had our 25th anniversary this year and had been going together for about four or five years before that.

I guess that tilts the scale over to Lily. And going all Gomez on her in hopes that the carpet matches the drapes.

Possibly, I'm taking this a bit too seriously. I'll stop now.
Posted by Chris Sturhann at 9:04 AM