This will be my sixth year attending the TCM Classic Film Festival (TCMFF), held April 11 to 14, 2019. In addition, I have been going to Comic-Con and other fan conventions for decades, so I know what it’s like to spend four or five days in a strange city living out of a hotel room and running around from the time you get up in the morning until the time you collapse in your room late at night.

This is, I think, the fifth version of this guide I've done. I've tried to refine things over the years. This year, I've decide to split this post up into three parts:

I've never addressed this before, but seeing how many questions I see on the Going to the TCM Classic Film Festival! Facebook group page, I thought I would give it a shot. Bear in mind this is kind of a dumbed-down version of what's on the official TCM Classic Film Festival page, the definitive source of all of this information. As I am writing this, all pass levels are sold out. I believe they finally sold out the lower levels of passes in late February. From top to bottom, the pass levels break down this way (prices reflect 2019 pricing):


Again, I do want to stress that I make no claim that the above information is definitive. You should always consult the TCM Classic Film Festival web site for details on passes.

When you get in line for a screening, you will be given a number in the order you enter the line, this means you can leave the line and go do something if need be, use the rest room, or grab a snack. I would check to see when they're going to move the line. Usually the people giving out the numbers have a good idea. That way you know how much time you have. You need to make sure you get back in in line before your number moves in. They will not hold a seat for you just because you have a number. Take advantage of it when you can. It could be the difference between a sandwich for dinner and Jujubes.

It's really simple if the line doesn't get messed up, which does happen sometimes. Say you and the person you're with get line numbers and want to leave to get popcorn. You get back to the line and figure out where your number should be. Most people put the numbers in the pocket of their badge, so you can usually see where you need to go. If you need to ask someone what number they are, go ahead. People are really good about helping you out. Say you and the person you're with have numbers 75 and 76. You find the people closest to yours. It might be 72 and 77. So you get in line in front of 77 and behind 72, knowing that 73 and 74 have to get back in line in front of you.

If you get in line and decide to just stay in line, it's better if you do not squish the line forward. There's are always going to be people who will need to get back in ahead of you. Sometimes the line will be really full, and you might not want to make it worse. Just figure out where you need to be and find out who has the numbers around yours. Then when the line starts to move you can get back in at the proper spot. 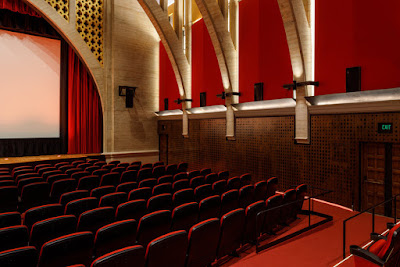 The important thing to keep in mind about the venues is where they are and how big they are. I’ve arranged the venues more or less in order by how close they are to the Roosevelt Hotel, since that is the host hotel:

If you have have the ability to come in a day or two early and/or stay a day or two late, there is other stuff going on, but not necessarily affiliated with official Festival. This is new information, and I can't really claim that his is an exhaustive list. I have always come up on  Wednesday before TCMFF and left on the Monday afterwards. This year for the first time I am coming in on the Tuesday. There are number of people who come in early and for me this will be a chance to hang out with my TCMFF buds an extra day. Personally, I'm trying to make plans to meet up with some of my Twitter #TCMParty cronies to have lunch at Musso and Frank's on Tuesday. In addition, other events include:

Stay tuned for Parts 2 and 3 of my TCMFF Survival Guide Posts to come.
Posted by Chris Sturhann at 5:42 PM