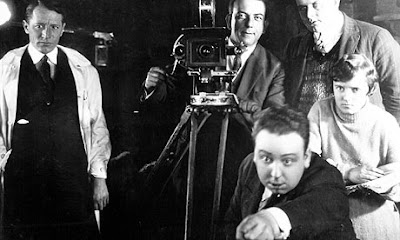 Ever since college, my favorite film director had been Alfred Hitchcock. In recent years, I began to think that maybe Billy Wilder might have supplanted The Master of Suspense, because Wilder was so versatile. Billy Wilder could do film noir. He could do comedy. He could do drama, war movies, and even one of my favorite courtroom dramas. I know I already mentioned comedy, but he could do comedy with a sense of tragedy and pathos like no one else, whereas Alfred Hitchcock seemed like kind of a one-trick pony.

Now, when I say, one-trick pony, I mean this is the absolute best sense of the word. To be truly successful as a one-trick pony, two things need to happen. First, it needs to a hell of a good trick, and second you need to do that one trick better than anyone else. This describes Hitchcock to a tee.

Another big difference is the technology. In the early 1980s, VCRs existed, but as a student, living on top ramen and macaroni and cheese a lot of the time, an expensive VCR was not in the cards. Also, while VCRs existed, large screen TVs did not. In class, we would watch the movies on 16 mm film. For the most part, you got one shot at it. You can't really fast forward, rewind, and pause a 16 mm film. Okay, you might be able to, but you would need to really know the film and have a projectionist, who really knows what he or she is doing.

With films on DVR and DVD and clips online that you can watch over and over again, you can really study them. You can watch them different times to look for different things, like objects in the background or just listening to the music and sound effects or even with the sound off to get just the information in the visuals. 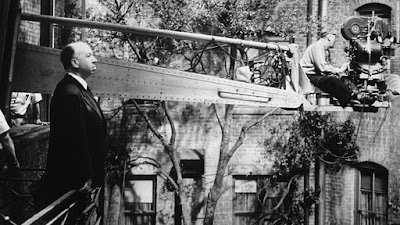 He learned his craft in the silent era, and often he would have long sequences in his sound films that advanced the story without the use of dialog. He used experimental and subjective techniques to manipulate the audience and explore the psyche of the characters. His films featured ordinary people as protagonists and sophisticated cultured villains. His films looked at marital relationships, extramarital relationship, parent-child relationships, and as much as was possible at the time homosexual relationships. Even his silent and early sound films that are often dismissed as un-Hitchcockian have elements he returns to in his masterworks:
That one trick is built on a whole bag of little tricks, and that bag kept on getting bigger throughout his career. Though most of his films were suspense thrillers, they integrated elements of espionage, romantic comedy, murder, betrayal, and mental illness, but all bore his personal stamp. In looking at that one trick or at Alfred Hitchcock as a one trick pony, I think it's important to ask yourself, did he repeat himself. Examine the following: 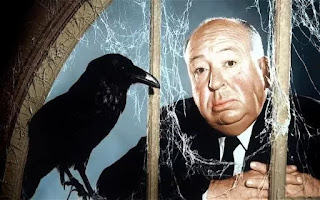 Yes, he often returns to the same or similar material, but is he repeating himself. I say, no. Not only did he stay ahead of trends in his films, he created them. In the late-1950s and early-1960s, when films like Desk Set and That Touch of Mink were using computers for comic effect, making boop-boop-a-doo noises and spitting punch cards on the floor, Hitchcock was using a real computer to create graphics for the credits of Vertigo and a predecessor to the modern electronic synthesizer to process the bird sounds in The Birds.

In 1946, 13 months after the atomic bomb was dropped on Hiroshima, Notorious was released featuring Nazis in Brazil trying to refine uranium ore. Technically, Hitchcock considered the uranium a MacGuffin, an insignificant plot detail that just as easily could be changed to industrial diamonds. Yet I find it significant that the atomic age was just over a year old, and he was already using it as a plot device.

I purposely left off Frenzy in the above. I did so because it helps bring me back to something I said at the very beginning of this piece. I have often heard that the period between 1967 and 1977 being a renaissance in American film. This is the era that gave us Bonnie and Clyde, Bullitt, The French Connection, Deliverance, The Godfather, and One Flew Over the Cuckoo's Nest. Alfred Hitchcock's best film in this period is clearly, Frenzy. In the 50 Years of Hitchcock class, it was mentioned numerous times that Francois Truffaut called Frenzy a young man's film. Hitchcock made it when he was in his 70s. When I look at Frenzy, it seems perfectly at home with the other films of the 1960s and 1970s I just mentioned.

At the beginning of this piece, I mentioned Billy Wilder, but when I look at Billy Wilder's later films, The Private Life of Sherlock Holmes, The Front Page, and Fedora (I haven't seen Avanti! or Buddy Buddy), I don't feel like they are at home with other modern films in the way that Frenzy is. I know that this is an unfair comparison, but now that I've had a chance look at Hitchcock with fresh eyes, I think I'll take Hitchcock's one trick over Billy Wilder's versatility. Sorry, Billy, I love you, man, but Alfred Hitchcock is the man.
Posted by Chris Sturhann at 2:17 PM