"I am big. It's the pictures that got small."

Norma Desmond
Sunset Boulevard
This series takes the stars from a certain big screen film and looks at where those stars appeared on the small screen, TV. The parameter of this series is I try to keep it to appearances where you can stream single episodes. It's probably not worth buying an entire season on DVD just for an episode or two. This is an all Alfred Hitchcock edition of Big Stars Small Screen looking at stars from Shadow of a Doubt (1943).

Sadly, I wasn't able to find, Teresa Wright. Not that she didn't do TV. She even did two episodes of The Alfred Hitchcock Hour, Hitchcock's hour-long series (1962-1965). Unfortunately, this later series doesn't seem to be available streaming.

The two episodes are:

The Alfred Hitchcock Hour, Season 2, Episode 12
"Three Wives Too Many" [Info via IMDB]
This one looks like a hoot. Teresa Wright co-stars with Dan Duryea, a bigamist who has four wives, well, that is until the one wife goes after the other three.

The Alfred Hitchcock Hour, Season 3, Episode 6
"Lonely Place" [Info via IMDB]
Teresa Wright is upset when her husband hires a crazy drifter to work on the family farm. Bruce Dern plays the drifter. They had me at Bruce Dern and crazy.

I did find this TCM Word of Mouth video where Teresa Wright discusses, Alfred Hitchcock and Shadow of a Doubt, so that will have to do for her:

I did find several of the other stars on episodes of Alfred Hitchcock Presents, which is available streaming.

Joseph Cotten appeared in three episodes of Alfred Hitchcock Presents. I'm going to look at two of them. 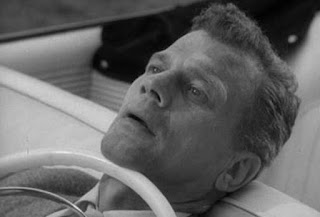 In this episode directed by Alfred Hitchcock, Joseph Cotten plays a businessman. While on a car trip, he has an accident where he is paralyzed and trapped in the car. Unable to speak or even blink his eyes, he is unable to ask for help from the people who happen by and assume he is dead. The episode is more of a psychological study as Cotten desperately tries to figure out how to convince someone he is still alive. Also in the episode in a small role, is Raymond Bailey, who played Milburn Drysdale on the Beverly Hillbillies. 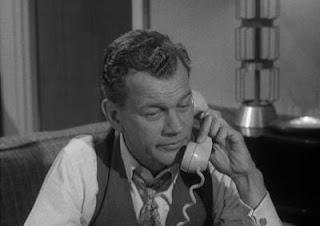 In this episode directed by Robert Altman and set at Christmas-time, Joseph Cotten plays a married man, trying to pacify his young mistress. He tells her that everything is okay, that he has told his wife that he wants a divorce, but in reality he has no intention of ever leaving his rich wife. When he starts back-peddling on the divorce, she decides to take matters into her own hands and call the wife herself. Cotten has to stop her in a most violent manner but ends up getting locked in the office building with her over the holiday weekend. He has to figure out how to get out, hopefully, without anyone noticing.

Alfred Hitchcock Presents, Season 5, Episode 9
"Dead Weight" [Info via IMDB]
Not available on Hulu, but you can stream at:
http://www.dailymotion.com/video/x578m02 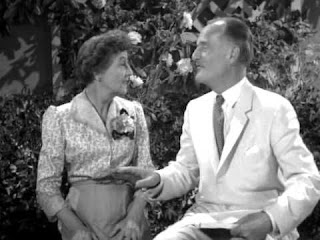 Patricia Collinge plays an elderly woman who lives with her sister in Louisiana and has written a murder mystery. Her publisher played by John Williams (the detective from Dial M for Murder) comes to discuss the story and close the deal on the book. When he gets there, he finds that the manuscript rings a little bit too true with regard to Patricia Collinge and her sister. Collinge's sister is played by Evelyn Varden who is probably best known for playing the doting neighbor lady in The Bad Seed.

In Shadow of a Doubt, Hume Cronyn plays the next-door neighbor who along with Teresa Wright's father is obsessed with murder mysteries, and they are always contriving ways to kill each other but fail to notice the real-life murderer in their midst. He also had a key role in Hitchcock's Lifeboat, in the only Cronyn role I can think of where he gets the girl. Okay, not the girl, but a girl. He appeared in two episodes of Alfred Hitchcock Presents. 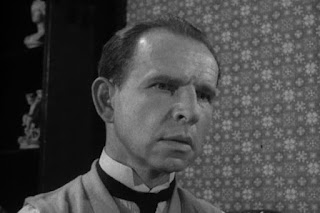 I chose this of the two episodes because it was directed by Paul Henreid. Hume Cronyn plays a British lawyer during World War I. An old client comes to call after his not seeing her for ten years. She has left a sizable investment with Hume Cronyn and now wants to reinvest in her brothers' business, which is expected to make huge profits due to the war. Just one problem, he doesn't have the money, causing Cronyn to take drastic measures. What follows includes cross-dressing and an unexpected body resurfacing. 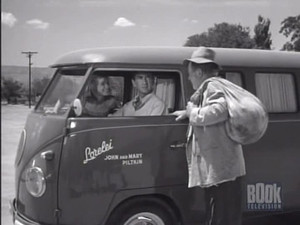 Macdonald Carey plays a college professor driving across country to take a new job. He has found an injured coyote on the road and stops to try to get medical attention for the animal. As no good deed goes unpunished, he encounters a young woman played by Collin Wilcox Paxton (an actress so familiar that I had to look her up). Collin Wilcox Paxton is best known as Mayella Ewell, the chifferobe kindling woman from To Kill a Mocking Bird. She needs a ride to visit her brother in a town 30 miles away. Well, in addition to having a brother, she also has a father (Edgar Buchanan, Uncle Joe from Petticoat Junction), and all of them are con artists if not outright thieves. After being stranded on the side of the highway, the good professor figures out a way to get even.
Posted by Chris Sturhann at 3:50 PM