In theory, this should be a short post. In practice, I'm not sure I am capable of doing a short posts. This basically covers the Monday after the TCM Classic Film Festival (TCMFF), give or take. We got up fairly early, because I wanted to go to Amoeba Records before we headed back to San Diego by train. I had to be back at work the next day, so I didn't want to get back too late. We packed and went downstairs and then checked out and left our bags at the bell desk.

My daughter Jasmine wanted to go to Hot Topic in the Hollywood and Highland mall. I figured she's 15 and you can't take a 15-year-old passed a Hot Topic like a hundred times and not have her want to go in. While she browsed, I went to Starbucks for coffee and breakfast for the two of us. The timing worked out about perfect, because she was done right about the time I got out of Starbucks.

Amoeba Records was probably about a 20 minute walk from Hollywood and Highland. I wanted to get there close to 11:00 when it opened. We missed that by about a 40 minutes. If you're not familiar with Amoeba Records, the building takes up a whole block and about 90% of the ground floor is CDs. There's also an upstairs with DVDs and to be honest, I'm afraid to even look. As it is, I end up spending way too much from just the short time we had there. Jasmine loves music, but for the most part grew up in a world without record stores. Now, that's not really true. There are a handful of record stores in San Diego, but they are small little hole-in-the-wall places, which despite their tiny size still manage to beat the pants off the other option, the ever-shrinking CD section in the big-box stores like Target and Best Buy. I told her that Amoeba Records was big, but I don't think she was at all prepared for what she saw:

We only spent about an hour in Amoeba Records. My only regret is that I didn't bring a list with me. I know I bought at least one, but possibly as many as three CDs I already owned, but at least they were all things I knew I would never find in San Diego.

In the morning as we left, they had closed off part of Hollywood Blvd and put up fences to keep people off the street but we had no idea why. On our way back to the Roosevelt, we got our answer. Two guys passed us wearing what looked like backstage passes around their necks with the Van Halen logo. There you go. We got our bags from the bell desk and headed out to catch the L.A. Metro to Union Station for the train back to San Diego.


I decided to get one last picture of Hollywood Blvd. In the lower right, you can see the fence for the Van Halen concert.

What I hadn't intended was catching Freddy Krueger on his cell phone.

It turned out the L.A. Metro was closed. I'm not sure what happened. All I know is that there were a lot of cops in the station. We went down Highland to find a spot to call and wait for a cab out of the sun. The front of Hollywood High School was about a block and a half away, and that seemed to be as good a spot as any. Before we got there I managed to flag down a cab that was going passed. I wasn't sure how bad the cab ride would be, but at that point, we didn't have a lot of choice. Earlier I had tweeted that picture of Jasmine at Amoeba, and while we were in the cab, Kristen (@salesonfilm) responded using a #JasminesFanClub hastag. Jasmine was very happy to have been hashtagged, "Oooh, I feel famous." That cab was about $25. I expected worse, although with tip it came to about double what it would have cost on the Metro.

We got tickets for the first available train to San Diego which was leaving in about 50 minutes. The difference in cost between regular tickets and business class is fairly minor, so I sprung for the extra. It turns out they had a business class lounge, where we could wait. We grabbed some food. I looked at Twitter and saw something from Jeff (@jlundenberger) that he and his partner had taken the Metro to Olvera Street. Looking at the timestamp, they must have got on the Metro station right before they closed it down. Olvera Street is like spitting distance from Union Station, but I figured we didn't have time to didn't have time to meet up with them. Still, I felt obligated to give them crap: 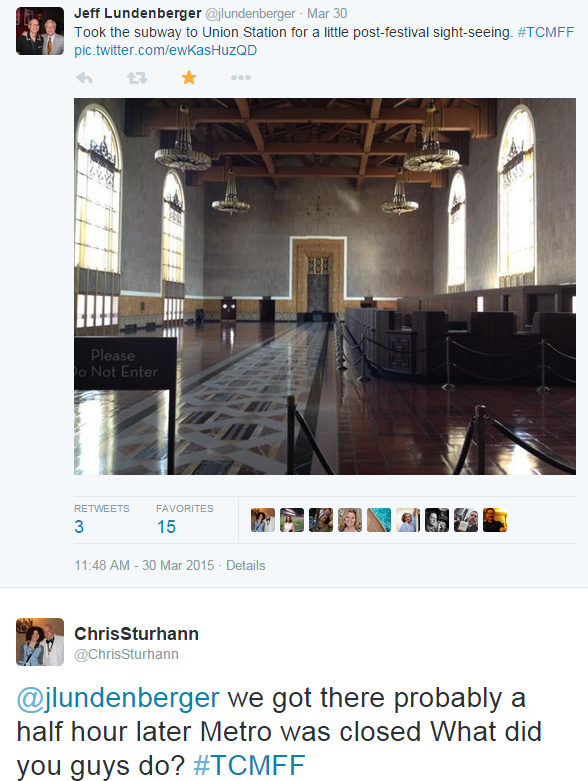 In the Business Class lounge, the woman at the desk at asked us if we wanted a Red Cap to help us to the train. At first, I thought it wasn't worth the trouble, but then realized the connection to North by Northwest and figured that alone justified the cost of the tip. It turns out the Red Cap was a mid-forty-ish woman in a polo shirt and a red baseball cap, who bore virtually no resemblance to Cary Grant. Still, it was a way to maintain the connection to the old movies I was leaving behind, so it was a good call.

The trip home on the train was fairly uneventful. Jasmine and I talked a little bit, but we were both too exhausted to say much of anything. We mostly just listened to music on our phones and enjoyed the scenery. 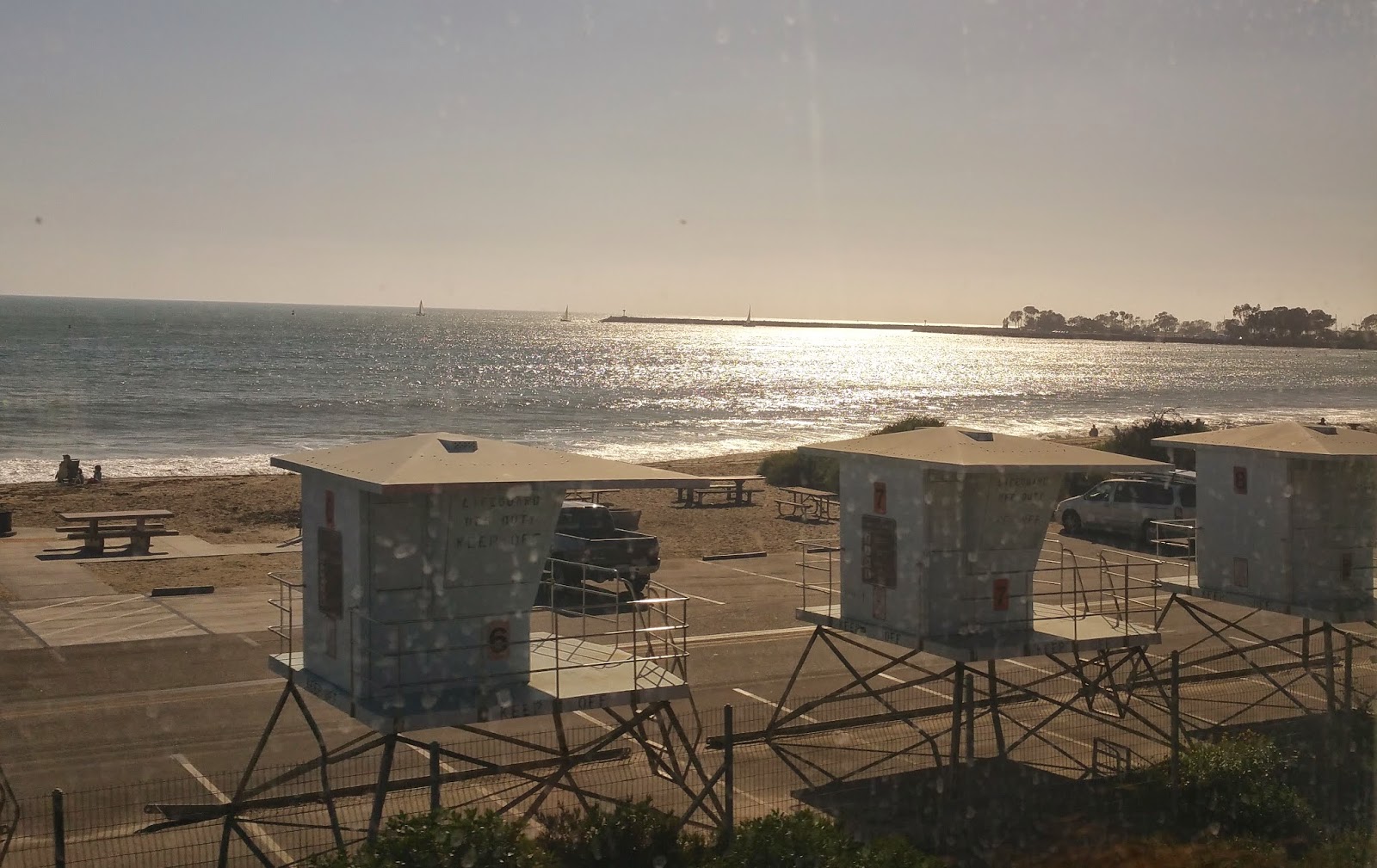 I know that at one point the guy sitting across from us got up and  came back with a bottle of Stone Ale. I remember thinking I could really go for a beer, but I didn't have the energy to get up and go to the bar. It was all the way downstairs in the same car I was sitting in.

I texted my wife when we were about 5 minutes out from the Santa Fe depot in Downtown San Diego. We live really close to Downtown, so she would get down there about the same time we could get to the front of the station. She'd already left, and by the time we made it out, she'd found parking about a block away, a minor miracle in that part of town.

I got home and made my second to last tweet of TCMFF:

I little while later I made my last tweet of TCMFF 2015:

I do want to take this opportunity to thank TCM, and in particular Shannon and Noralil, for having Jasmine and me as Social Media Producers. We had a great time. We would have had a great time anyway, but that made it all the more special. Thank you. We had a blast. 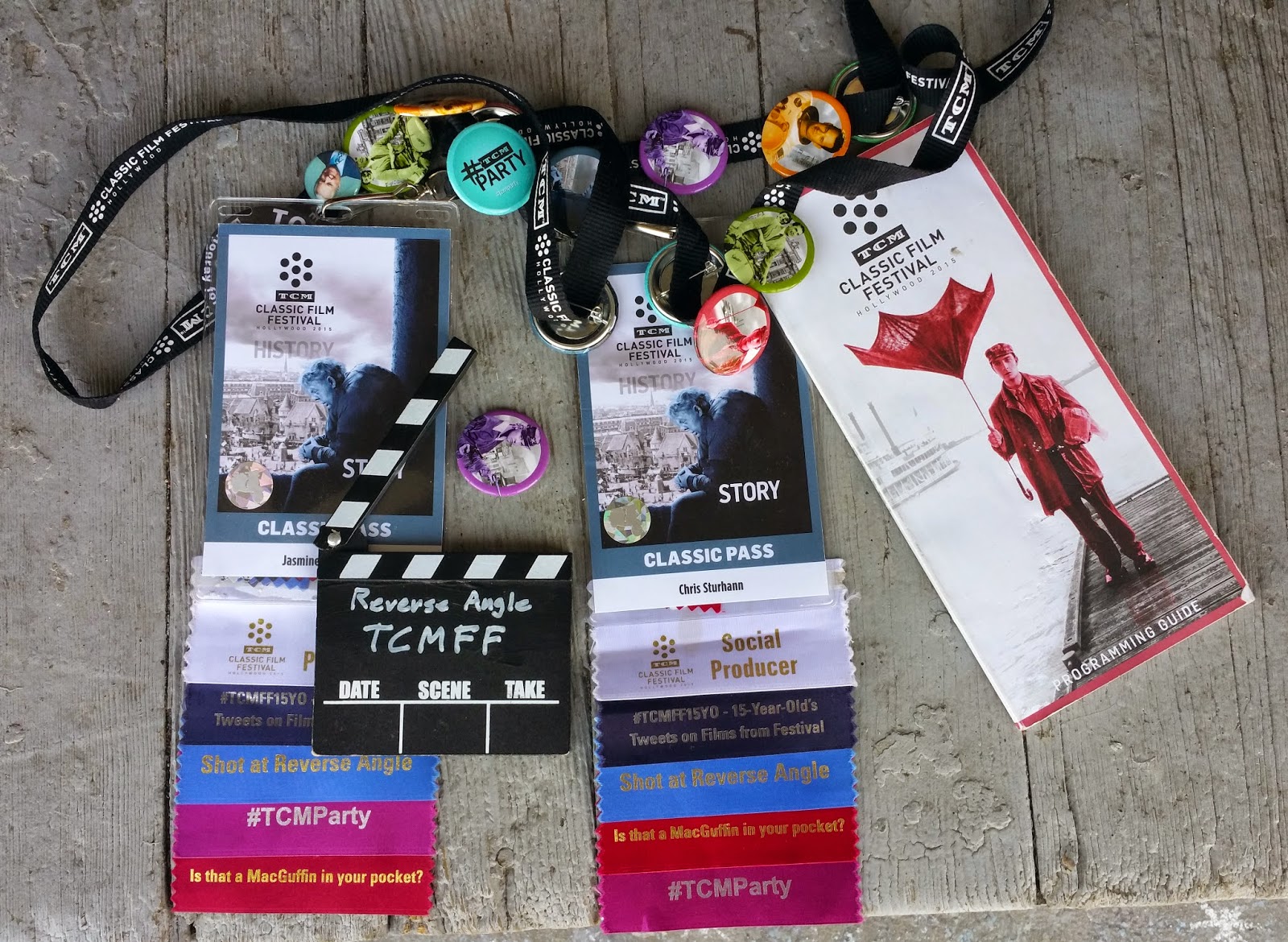 
I had to go to work the Tuesday after TCMFF ended, not a good idea, but I didn't have enough vacation time to take any more days off. I got out of work at about six o:clock and fortunately traffic was better than usual on the way home. I got home by about 6:30. This is what I found:

Posted by Chris Sturhann at 2:23 PM